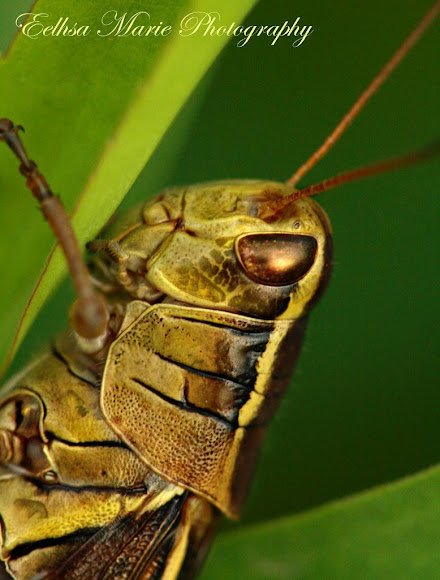 The Two-Striped Grasshopper is a large grasshopper (30-55 mm) and is characterized by two stripes down its back, which give it its name. This species has one generation per year. The eggs are laid by the female during August and September and will hatch in the spring. The first instar nymphs emerge in late May to early June. Due to the large numbers that can occur, this species is often considered a pest in Canada and the U.S.

The Two-Striped Grasshopper is most often found near streams, marshes and fields and feeds on a large variety of weeds and crops. They are also known to eat trees and shrubs.

This species of grasshopper is known to be highly susceptible to various diseases, parasites and fungal infections. One such fungal infection causes "Summit Disease." Grasshoppers that have been infected by the fungus Entomphaga grylli, will climb to the top of grasses or other plants where they will cling tightly and die. http://www.biocontrol.entomology.cornell... During the last two summers we have had high numbers of grasshoppers in the area. I have observed quite a few of these infected grasshoppers at the tops of grass and plants.