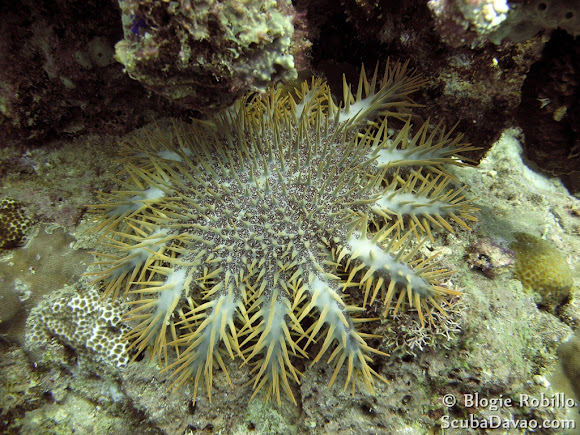 Crown-of-Thorns walk on the open bottom between reefs searching for live corals to eat. They climb onto the coral, extrude their stomach over them, releasing digestive enzymes to break down the coral and then absorb the liquefied tissue. They feed nocturnally, maintaining a constant distance between themselves and other crown-of-thorns sea stars. During times of food shortage, these creatures can live on their energy reserves for over six months. This species is at least partly responsible for much loss of coral reefs. They are voracious predators that can wipe out large areas of coral, each Crown of Thorns can consume up to six square meters of living reef per year. They have very few predators, including the Giant Triton (Charonia tritonis), Humphead Wrasse, and the Pufferfish (Arthron Hystrix).

Found on coral reefs. They are found widespread in the Indo-Pacific region.

These are just some of the photos of COTS that I shot at the Coral Gardens dive site near Talikud Island, Samal, Philippines. The patches of dead coral found in this dive site is growing at an alarming rate. With the population of COTS predators (triton shells, etc) now practically over-fished, it has become difficult to manage COTS outbreaks when they happen.

They come in different colors, too! But they can be deadly -- I know of a diver here whose arm was paralyzed for a few days after he accidentally got pricked by one of these critters.

Despite the destruction they cause, they are spectacular looking.