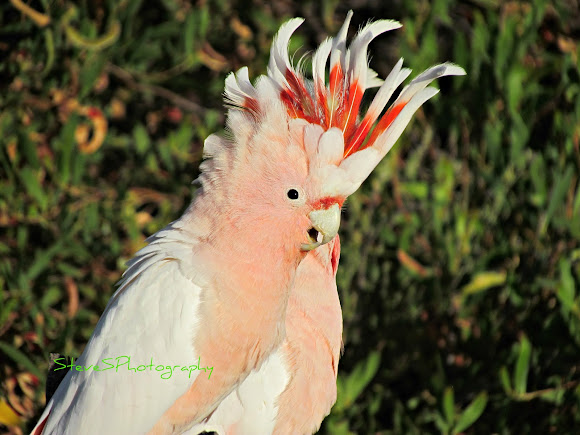 The Major Mitchell's Cockatoo is a jewel of the Australian Bush. Generally regarded as the most beautiful of the Cockatoo family this small to medium bird only raises its crest for approximately ten seconds after landing (much to the frustration of the photographer!!). This flock of Majors was drinking at a waterhole near the Eyre Bird Observatory

Restrict to inland areas prefering arid to semi arid regions with flowering Acacia, Callitris, Allocasuarina and Mallee scrub. As such this bird is declining due to habitat loss for farming. Major Mitchell pairs will not nest close to one another; in consequence, they cannot tolerate fragmented, partly cleared habitats (typical of the Wheatbelt region). Nationally listed a Least Concern, though the Victorial Government recognises them as a threatened species.

It is named in honour of Major Sir Thomas Mitchell, who wrote "Few birds more enliven the monotonous hues of the Australian forest than this beautiful species whose pink-coloured wings and flowing crest might have embellished the air of a more voluptuous region".