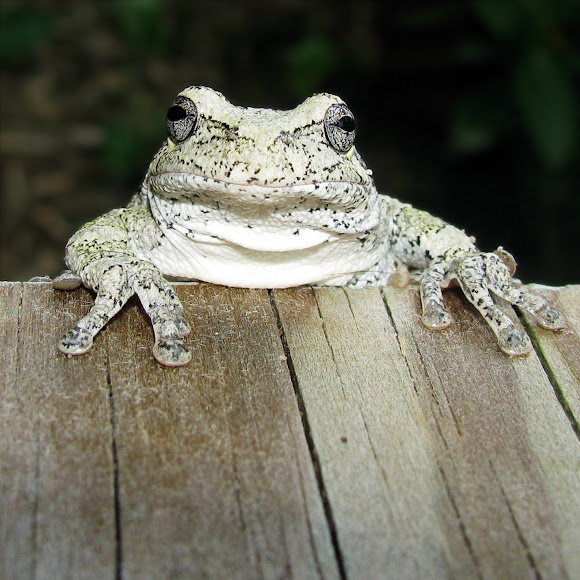 The two species, H. versicolor & H. chrysoscelis, are virtually indistinguishable, the only readily noticeable difference is their calls - H. chrysoscelis has a shorter, faster call. Also referred to as the North American Tree Frog, Gray tree frogs change color slowly and may be found in gray, green, olive, or many hues of these colors depending on temperature and the substrate they are sitting on. They feed on small insects and spiders. Gray tree frogs hibernate on land. They produce glycerol, an antifreeze used by some insects to protect cells during the freezing process and can survive temperatures as low as 21 F (-6 C) for several days.

looks like jack climbing up the beanstalk; or in this case, the ledge.
or maybe it's the giant, on second thought :)

Thank you so much Karen - Your PN blog posts are always a pleasure to read :)

Congratulations Kim, this awesome spotting is featured in the Project Noah today, which is on "Masters of Disguise"! http://blog.projectnoah.org/post/2990181...

Thanks Brandon! Moss rose is also one of my favorites, especially the fiesta mix... Everyday brings a different color!

He looks like he's ready for the "all you can eat" buffet! Super cool photos and spotting, also like the moss rose you have planted within the rock garden! It's one of my all time favorite annual garden plants.

Thank you everyone for all of the nice comments!!
and thanks again Project Noah for the SOD - what an honor!

Congrats on the SOTD! Gotta love the 1st shot! :)

Great Description, thanks for the information. Congratulations!

wow! Thank you so much!!

Congratulations! This adorable tree frog was selected as Spotting of the Day!

"Gray tree frogs produce glycerol as an antifreeze when hibernating in the winter. Apparently, they also do pull-ups to get in shape for the summer, as you can clearly see in this Spotting of the Day!"

Beautiful capture and spotting - looks like he is doing chin-ups!

Thank you mdwildlife - This frog was quite the poser :)

That photo actually made me laugh. What a great expression. Thanks for sharing

Thank you for your comments!

Amazing coloured frog. Looks quite 'solid' for climbing trees though :)