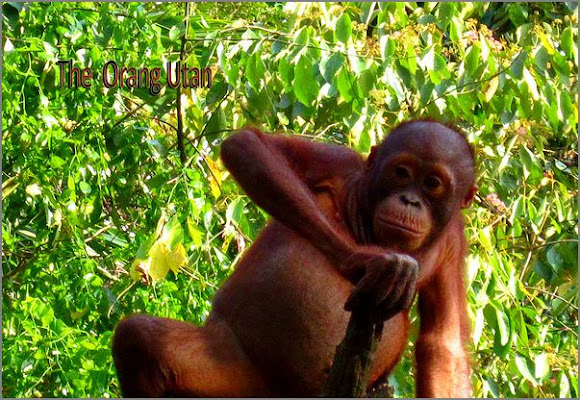 Orangutans are a species of great ape found only in South East Asia on the islands of Borneo and Sumatra, although evidence of their existence has been found in Java, Vietnam and China. The gentle red ape demonstrates significant intelligence, with an ability to reason and think and is one of our closest relatives, sharing 97% of the same DNA as humans. Indigenous peoples of Indonesia and Malaysia call this ape Orang Hutan literally translating into English as People of the Forest. The name of the genus, Pongo, comes from a 16th century account by Andrew Battell, an English sailor held prisoner by the Portuguese in Angola, which describes two anthropoid “monsters” named Pongo and Engeco. It is now believed that he was describing gorillas, but in the late 18th century it was believed that all great apes were orangutans; hence Lacapade’s use of Pongo for the genus. In times past they would not kill them because they felt the orangutan was simply a person hiding in the trees, trying to avoid having to go to work or become a slave. Orangutans are unique in the ape world. There are five kinds of great apes: gorillas, chimpanzees, bonobos, orangutans and gibbons – though gibbons are known as the “Great Lesser Apes “. The Sumatran orangutan (Pongo abelii) and the Bornean orangutan (Pongo pygmaeus) Orangutans are found only on the islands of Sumatra and Borneo. The orangutan is the only strictly arboreal ape and is actually the largest tree living mammal in the world. The rest of the apes do climb and build sleeping nests in the trees, but are primarily terrestrial (spending their lives on the ground). Every night, orangutans fashion nests, in which they sleep, from branches and foliage. They are more solitary than the other apes, with males and females generally coming together only to mate. Even the hair color of the orangutan, a bright reddish brown, is unique in the ape world. And why are they this colour? Baby Pika Pika - just before heading into the canopy Well, the water in peat swamp forests, where orangutans live, tends to be a muddy orange. Sunlight reflected off this water can give the forest an orange cast, making orangutans hard to see in dappled light. Many of their nests, up in the forest canopy, contain orangey-brown dead leaves, and some trees have reddish leaves when young. This camouflage renders them practically invisible from the ground. Source http://www.savetheorangutan.co.uk/