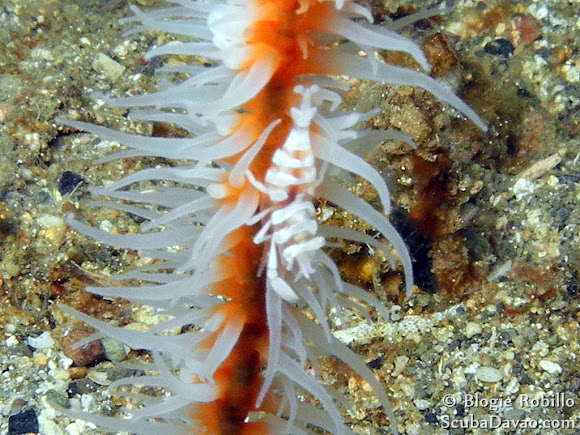 Also known as Sea Whip Coral Shrimp, Whip Shrimp and Wire Coral Shrimp. This shrimp has a transparent body with purple antennae and horizontal purple lines down its length. They feed on parasites, algae and plankton, and grow to a length of about 1.5cm. This might be a color form of P. unciger. The body is more translucent than typical, and the opaque bands are white instead of orange or brown.

Found exclusively on the Giant Black Coral Whip (Cirrhipathes sp.), at depths of 3 to 55m. Widespread in the Indo-Pacific region.

I photographed this shrimp at a dive site called East Point, in Barangay Tagpopongan, Samal Island, during a day dive.

This could be a whip coral shrimp (http://www.projectnoah.org/spottings/860...), but not quite sure because of the coloration...

Well, I hope we get to go back this Saturday or Sunday. :)

Wow, we should go back there Blogie.