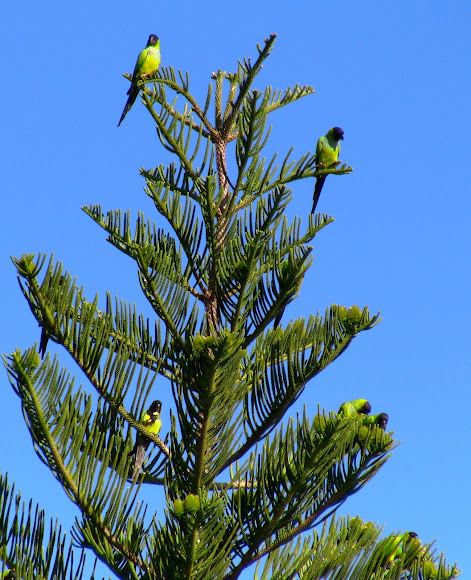 The Nanday Conure (Nandayus nenday) is also known as the Black-hooded Parakeet or Nanday Parakeet. The Nanday Conure, Nandayus nenday is the most commonly kept pet conure species outside of the two main genera. Some experts believe that Nandays should actually be grouped with the Aratinga genus, since they are cross-fertile with such species as Jendays and Suns. Nanday Conures have a distinctive black head, and wings and tails tipped with dark blue feathers. They have a light-blue scarf and bright orange feathers on their legs and around their vents. The maturity of a Nanday can be told by the edges of its black hood: if the hood has a ragged edge of brown, then the bird is over a year old. Although Nandays are often said to be extremely noisy, it might be more accurate to say that they are a heavily flock-oriented species, used to making their demands known, calling out warnings for the group, and making inquiries about other members of the group who are out of sight. They are also extremely social and intelligent birds, capable of learning tricks, mimicking sounds, and learning a decent vocabulary. At least one report suggests that they are highly adaptable to human encroachment on their territories, but the exact status of the species in the wild is unknown.

Flocks of Nanday Conures have been seen living wild in parts of Florida, notably the west coast including areas of St. Petersburg and Clearwater. There is a large flock of "Nanday Conures" living wild in the Pacific Palisades neighborhood of Los Angeles. They have been resident in the area for the past several years. http://en.wikipedia.org/wiki/Conure#Nand...

I often hear them flying around the neighborhood. I was happy that I was able to get some photos of them, and a better look. They were pretty far away, in the top of those very tall trees, wish I could've gotten closer.

I hope it will be a fun and helpful mission, especially during spring and fall when migration occurs.

Heather, I was glad to find your mission. Thanks for creating it.

Laurie, I'm so glad you included this picture in this mission. The little map feature would not let me expand it to the whole state of Florida, but only the northern most part of Florida. I wanted to include birds in the whole south eastern USA - spotted in backyards, feeders, local parks, etc. But not captive, unless being rescue/rehab for wild re-release.

Thanks CJ! It is cool.

Must be so cool to have these right in your neighborhood. Great video!

Thank you so much, Satyen!

Nice birds, thanks for video,

Emma - I agree, they are pretty birds.

Thanks for your comments, Atul and Ashish!