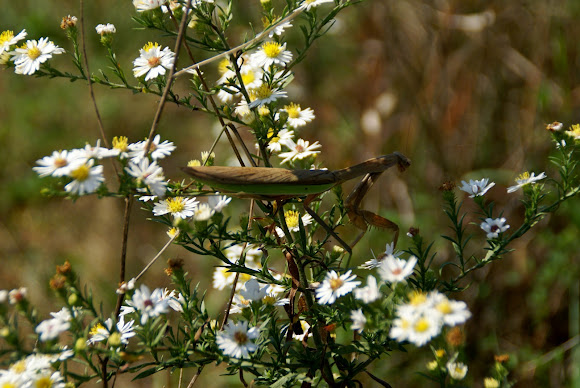 They have triangular heads poised on a long "neck," or elongated thorax. Mantids can turn their heads 180 degrees to scan their surroundings with two large compound eyes and three other simple eyes located between them. "Typically green or brown and well camouflaged on the plants among which they live, mantis lie in ambush or patiently stalk their quarry. They use their front legs to snare their prey with reflexes so quick that they are difficult to see with the naked eye. Their legs are further equipped with spikes for snaring prey and pinning it in place." National Geographic

Among plants where their prey lives.

"The praying mantis is named for its prominent front legs, which are bent and held together at an angle that suggests the position of prayer. The larger group of these insects is more properly called the praying mantids. Mantis refers to the genus mantis, to which only some praying mantids belong. Moths, crickets, grasshoppers, flies, and other insects are usually the unfortunate recipients of unwanted mantid attention. However, the insects will also eat others of their own kind. The most famous example of this is the notorious mating behavior of the adult female, who sometimes eats her mate just after—or even during—mating. Yet this behavior seems not to deter males from reproduction. Females regularly lay hundreds of eggs in a small case, and nymphs hatch looking much like tiny versions of their parents." National Geographic