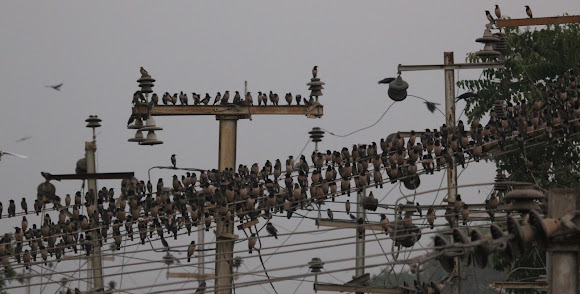 The adult of this species is highly distinctive, with its pink body, pale orange legs and bill, and glossy black head, wings and tail. Males in the breeding season have elongated head feathers which form a wispy crest that is fluffed and more prominent when the bird gets excited; the crest is shorter in winter and the black areas have paler feather edges, which get worn away as well as the black becoming more glossy in the breeding season. Winter plumage in males is rather dull. Females have a short crest and are duller overall, especially without the sharp separation between pink and black. The breeding range of this bird is from easternmost Europe across temperate southern Asia.[1] It is a strong migrant, and winters in India and tropical Asia. In India in winter, it often appears to outnumber the local starlings and mynas. The Rosy Starling is a bird of steppe and open agricultural land. In years when grasshoppers and other insects are abundant, it will erupt well beyond its core range, with significant numbers reaching France and the United Kingdom.

Most impressive. Thanks for sharing.

Thanks Sachin. You have got a nice collection.

Nice to see them in such a big group I also got chance to capture their flight, http://www.projectnoah.org/spottings/901...

Fantastic video. Thanks a lot for sharing. The site of these birds flying is almost similar.

It must be nice when they all start flying...
I found this sample which I found nice to share:
http://www.youtube.com/watch?v=eakKfY5aH...

On my recent visit I saw many Rosy starlings getting together in the evening before heading home. Uploaded the first pic from such an evening gathering. Flocks and flocks would arrive and join in.