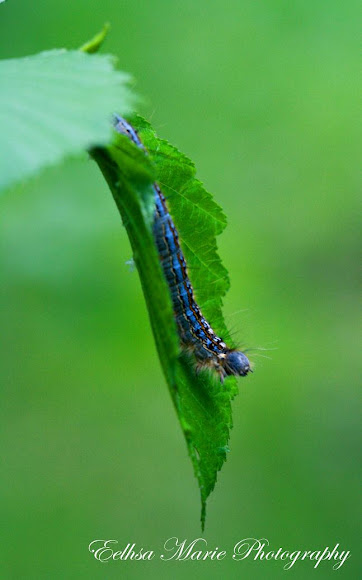 The Forest Tent Caterpillar is usually around 2 inches (5 cm) in length, but has been known to reach lengths of 5 inches. They are distinctly marked with a row of white patches down their backs, stripes down their sides and long hairs over their feet. Due to regular outbreaks, this caterpillar is often considered a pest. The Forest Tent Caterpillar is quite social and during outbreaks they can often be found in large numbers on deciduous trees such as poplar and maple. When there are high enough numbers, entire trees can be stripped of their leaves. Usually this causes no permanent damage to the trees, but when caterpillar numbers remain high for for 3 or more years, trees can begin to die. Outbreaks of the Forest Tent Caterpillar typically occur every 10 years and last from 2 to 4 years. The regularity of recurring outbreaks appears to differ depending on the region, with more regular outbreaks observed in Eastern Canada than in Western Canada. The exact cause of outbreaks is not known, but there are many natural and environmental factors that influence the occurrence and length of the outbreaks.

The Forest Tent Caterpillar and Moth are found throughout the United States and Canada and especially in the more eastern areas of these countries. The female moth prefers to lay her eggs on trees such as oak, sweetgum, aspen and sugar maple, but the caterpillars can be found feeding on a wide variety of deciduous trees and shrubs.

I remember a couple outbreaks that have occurred in my lifetime, the first in the late 80's/early 90's and the second around 2001. It's been over 10 years since we've had a major problem with them in this area, but over the last couple summers there have been an increasing number of them spotted. The areas with the most noticeable damage have been smaller so far and somewhat isolated (various trees here and there with significant defoliation).

We will attribute this photo to you by using your username, eelhsamarie. Once we hear back from you (either here or via email to GreatNatureProject@ngs.org), we’ll let you know which date we’ll highlight your photo. Please respond within 72 hours to let us know if you have any questions or concerns. If we don’t hear from you by then, we’ll assume everything is okay and we’ll share your image. Thank you for sharing your observations with The Great Nature Project!