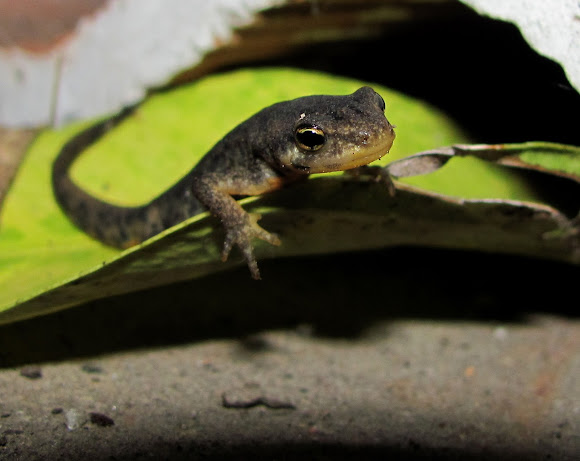 The Iberian Ribbed Newt has tubercles running down each side. Through these, its sharp ribs can puncture. The ribs act as a defense mechanism, causing little harm to the newt. In the wild this amphibian grows up to 30 centimetres (12 in), but rarely more than 20 centimetres (7.9 in) in captivity. Its color is dark gray dorsally, and lighter gray on its ventral side, with rust-colored small spots where its ribs can protrude. These newts have a flat spade-shaped head and a long tail which is about half their body length. Males are slenderer and usually smaller than females. The larvae have bushy external gills and usually paler color patterns than the adults. P. waltl is far more aquatic-dwelling than other European tailed amphibians. Even though they are quite able to walk on land, most rarely leave the water, living usually in ponds, cisterns and ancient village wells that were common in Portugal and Spain in the past. They prefer cool, quiet and deep waters, where they feed on insects, worms and tadpoles.

The Iberian ribbed newt or Spanish ribbed newt (Pleurodeles waltl) is a newt endemic to the central and southern Iberian Peninsula and Morocco. It is known for its sharp ribs which can puncture through its sides, and as such is also called the sharp-ribbed newt.

walking in the yard

i thougth it was a reptile:-)
i'am going to change
thanks for the correction Chris

Hi Antonio! I think you should add this photo to the Amphibians of the World Group. Newts are amphibians

thanks Carolina,it's the "angelic side of newt,i post the "diabolic" side to if want to see :-)