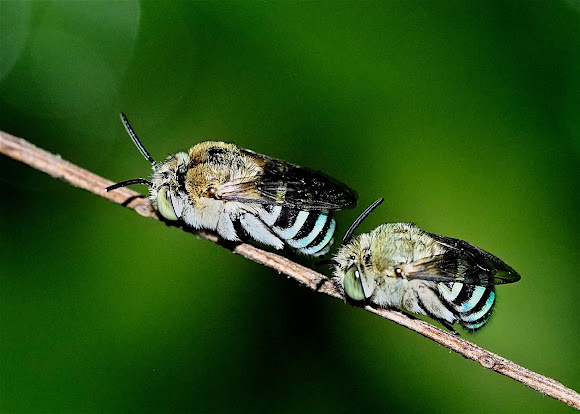 Amegilla cingulata, commonly known as the blue-banded bee, is an Australian native bee that occurs in many other regions, including India. I saw thesen ones waiting out a monsoon shower under a bush in my garden. The fourth one kept slipping off before he re-found his balance. Several years ago I found 1 of these bees in my garden. It must have found it suitable for breeding because they have multiplied rapidly. Now I see them darting from flower to flower all over the garden. Interestingly A. cingulata collects the majority of its nectar from blue flowers, not such a common colour in tropical flowers, but I have many blue flowers planted in my garden! They have the habit (as do hummingbirds) of hovering around a flower, diving down and then taking off at speed. They barely stop at each flower and hence are very difficult to photograph.. The male can be distinguished by the number of complete bands around the abdomen, having five as opposed to the females' four. They are small bees and can grow to 10–12 mm (0.39–0.47 in).

These bees are very important for the production of food and contribute to at least 30% of crops in Australia Blue-banded bees can sting, but are not as aggressive as other bees and they appear to be more rapid in movement. They are solitary creatures, with single females inhabiting burrows in the soil or soft stone, unlike social species such as honey bees, which live in large colonies. The males cling to plant stems during the night.

Little Aussies a long way from home. Great spotting, Pam. Awesome photos and informative notes too. Congrats on your SOTW.

Thank you Zlatan, Jim and Leanne on behalf on my little blue bees !

Thanks Mark. Yes more vivid than the ones I have seen here.

They do seem a little more vivid in TN btw.

Thanks also Maria dB... I like the second photo best also. Pity it was so dark though. Didn't have my flash on the camera !

thanks Antonio. Always such lovely supporting comments from you. Much appreciated...

Wow ! Thank you so much Daniele for SOTW. I just love these little bees... flashes of bright blue zipping around my garden. So happy tthat attention has been drawn to them ! I have seen them in Australia, but on the ones I saw there, the blue wasn't so bright. It's dayglow blue on the ones in my garden in India. The photos don't do the colour justice.

Fantastic spotting Pam,great series and great personal notes,perfect spotting,congrats on the well deserved SOTW and thanks for sharing

Congratulations Pam, your Blue-banded Bees have been voted Spotting of the Week! Your great set of images and interesting personal observations won you the vote.

"Waiting out a monsoon shower under a bush, these Blue-banded Bees (Amegilla cingulata) have been voted Spotting of the Week! Amegilla cingulata is native to Australia, but is also found in several Asian countries including India. The genus Amegilla belongs to the tribe Anthophorini (digger bees), solitary bees which make nests in soil. Yesterday May 20 2018 marked the first World Bee Day, as proclaimed by the United Nations General Assembly on December 20 2017. While this initiative puts an emphasis on honeybees, beekeeping and crop pollination, there is a need to educate and raise awareness about all 20,000 or so species of bees that are essential for ecosystems, such as orchid bees, digger bees, carpenter bees, cuckoo bees and more.
To learn more about bee diversity and pollination: https://buff.ly/2GEVsZf "

Thank you Ashley... Such a nice surprise !

Mark I have tried numerous to change the photo order, but I can't do it. For some reason I can't enter a tick in the content ownership square so it won't let me edit. I also would like to put the photo of the 3 of them first... The map doesn't come up when I try to edit either...

Beautiful and so interesting!

Why not the last or the 2nd as first Pam? Just a suggestion.

Great notes Pam. They certainly are excellent fliers. I was watching a Euro wasp trying to get one last week and it didn't even get close. I love that we share these with India.