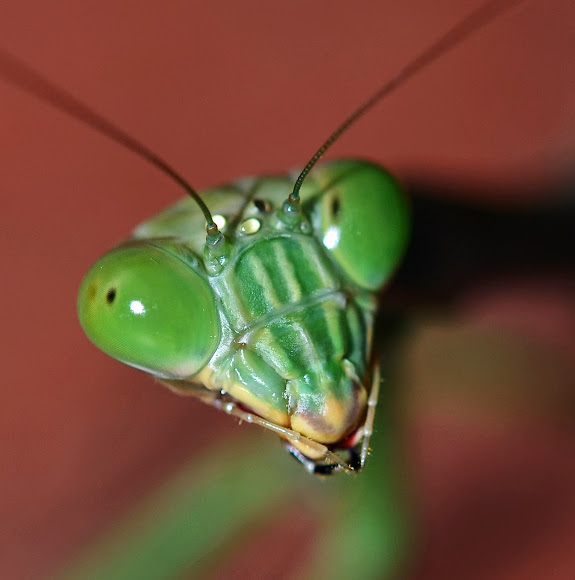 This large mantis (10cm) was kind enough to spend a few hours on my balcony on the East African island of Zanzibar, and allowed me to photograph it close and under all angles. Check the notes to learn about the mantis eyes!

The balcony of a house near the beach, with plenty of planted and native vegetation and insects nearby.

The large round shape of compound eyes, made up of many specialized zones called ommatidia, allows for a much wider angle of view than single-aperture eyes. The ommatidia can be distinguished on the first shot. The eyes of honey bees, dragonflies and praying mantises are enhanced, as zones of the eyes are arranged in an area called fovea for acute vision and allow more light to be received for a higher resolution and acute estimation of short distance. The little dark dot in each eye are the bottoms of ommatidia (the white spots are my light source). Only ommatidia directed at you can “see” any part of you. Both seem to follow you no matter where you look from. On the 3rd shot it can be appreciated that the mantis can literally see behind its back! ID unknown. The markings on the head are distinctive as well the blue colour on the forelegs.

Thanks for your further research Mr. Goldfish! I'll check the links carefully.

I think it is a species of Polyspilota. Cataspilota looks kind of stocky.
Scroll down to see picture of adult female Cataspilota
http://www.mantids.de/3.html
And adult males of Cataspilota in these pictures look totally different from your beautiful green mantis.
http://www.boldsystems.org/index.php/Tax...
Also the light stripes on the middle of the face of this mantis makes it look similar to a Polyspilota and also Tenodera have these stripes. But I have not seen a Sphodromantis with such bold stripes on the middle of their faces. Sphodromantis face below (only faint light stripes on face): http://www.treknature.com/gallery/Middle...

I do not know the differences between the mantids. The blue on the front legs is different but I have seen pictures of Polyspilota aeruginosa with something like it. The thorax looks longer and the wings look narrower than a Sphodromantis and the stripes on the sides of the wings stand out but Sphodromantis do not much. I cannot tell if it is male or female from the pictures but looks a little like female. And if it is female it's body is narrow for a Sphodromantis (as I said I cannot tell if it is female). The edge of the thorax is more pointy on the sides while adult male Sphodromantis lineola look bigger and more like a disc (Tenodera and other species of the tribe seem like that). But Tarachomantis of Paramantini might have the pointy edge like that also. The eyes also are different I think. They look kind of like they are pointy upwards but maybe not.

Thank you Mr. Goldfish. To help me learn and understand more about these can you tell me what specific part/s of the mantis you are looking at to place it in this tribe?

Thank you. :) I thought this might not be a Sphodromantis. I do not know if it is, sorry.

Hi Mr. Goldfish! I've replaced the last picture by one showing the whole top of the mantis if this can help.

Do you have anymore pictures that show the whole top of the mantis and side?

Thank you all!
Rubens I'd love to join your mission! However please note that all user-created missions are local only. You mission can not extend a radius of 300 miles. You should rename appropriately.

Please, add to the following mission:

Thank you for your comments Satyen and AshutoshSarkar!

Superb macro of the face. Thanks for sharing.

Thanks Nicholas4! I did find her quite gorgeous myself...

Thanks Palaimon! These pictures were taken with a Nikon D7000 and a Nikon 60mm macro lens.

Amazing macropictures!! What kind of camera did you used?