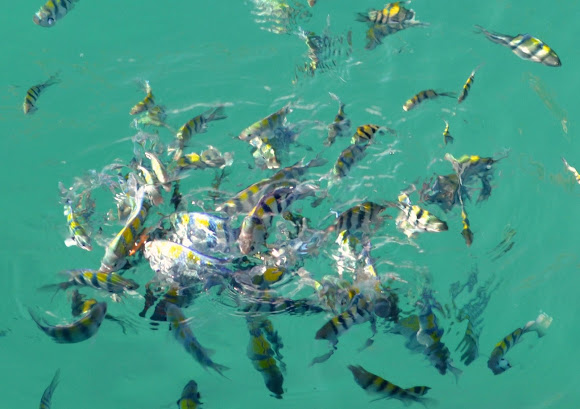 The Sergeant Major or píntano (Abudefduf saxatilis, family Pomacentridae) is a large, colourful damselfish. It earns its name from its brightly striped sides, which are reminiscent of the insignia of a military Sergeant Major. It grows to a length of about 15 cm (6 inches).

Sergeant majors are found throughout the tropical reaches of the Atlantic, including off the south coast of the United States, Central America, eastern South America ,including the island Bonaire and western Africa. They are often found on coral reefs at depths of between 1 and 12 meters. They are popular aquarium fish, although their aggressively territorial nature can pose problems if not closely watched.

Spotted this school of fish alongside our motorized boat.

Sergeants, I think. Very nice! love the water contrasting with the fish school :-)