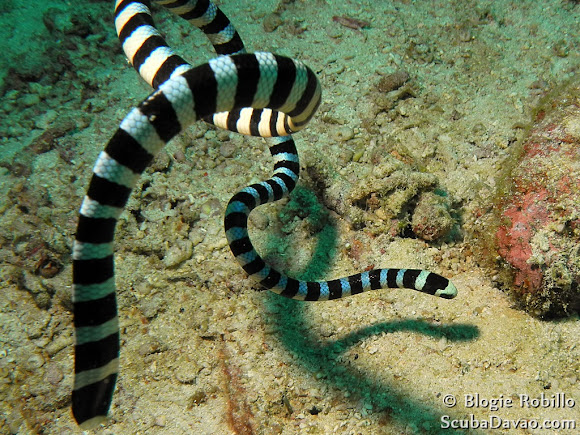 Also known as Colubrine Sea Krait and Yellow-lipped Sea Krait. They feed on small fish and garden eels, and can grow up to a length of about 70cm. Sea kraits need to drink fresh water from time to time, so it is not uncommon to see them on land. Although shy, they are highly venomous snakes.

Found on coral and rocky reefs all over the tropical Indo-Pacific region.

I see these sea krait everywhere, and at various depths -- the shallowest I've ever seen one was at less than a meter, and the deepest at around 30m. They're quite shy and will scamper away if disturbed. You'll see that in the video: its tail accidentally brushed my face (off camera), so when I swiped at it, it swam away from me as fast as it could.

That is a cool animal.

Thanks for the ID suggestion, whatsthatfish, but this has long been identified here already. :D

That's so cool, moralcoral! I hope to be able to read that when it's out. :)

Cool i was helping out Dr. Wayne Bennett from the University of Florida looking at cutaneous respiration in sea kraits, you know thay can take up oxygen from all oraphis including its anus! fact of the day! hopefully their will be some publications out in the next year!!

Whoa... Thanks for the info, moralcoral! Amended my description of the spotting.

Majestic animals but still need to be cautious

Its not true that their mouths are to small, we spent 2 months studing them last summer and they definately can bite!! we had one lunge at us with fangs wide and a local child on the island where i work actually got bitten as they often handle and play with the snakes, he was lucky it didnt envenomate, they usually only do around 20% of the time but not a chance you like to take!!

Hi Nichole! Thanks for the heads-up. I've already added this to the mission. :)

Great shot! I think the sea snake would make an awesome addition to the Snakes of the World mission. = )

You're welcome, animaisfotos! Yeah, the movement and those rings were mesmerizing indeed.

The video really adds value to the spotting. Now I know what it feels to be a fish looking at all those stripes winding... Truly hypnotic! Thanks for sharing.

Hi ChunXingWong! These snakes don't really care about divers all that much. Besides, their mouth is simply to small to be able to bite us. :D

Luckily it didn't find you as a threat or food, their bites are pretty venomous.

Fantastic spotting and video Blogie! Noe and Pili are right: sea snakes do need to some up to the surface to breathe. Apparently some of them can stay under for up to 1h!

Yes, we do have great diving out here! You guys should dive here one of these days. :)

With the pattern of black and white lines Its movements are hypnotics.
Diving in southeast of Asia must be awesome.
You have great underwater pics :)

Hi there, Noe & Pili! Well, I've always known about their mouths being too small to bite (except maybe the lobes of your ears), so I wasn't really scared even on the first time I saw one. I was very hesitant to touch them at first, though. But now I've tried it already -- not a good idea to do that, however, because you'd just be disturbing them.