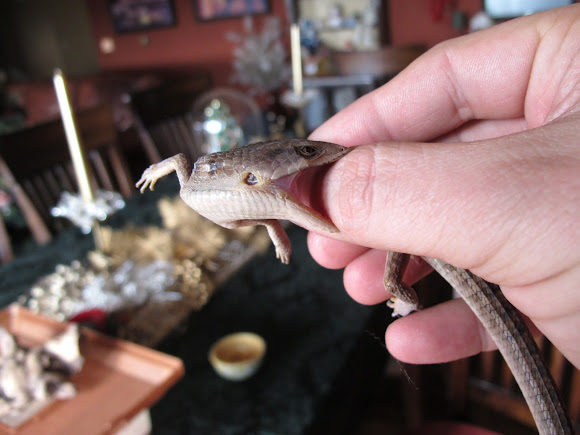 Very long and slender lizard with brown, black and white markings. This series shows the long, flexible tail, detail of the markings, closed eyes and the bite! The video shows it breathing, tasting the air with its tongue, moving and biting. This is a subspecies of the Southern Alligator Lizard. Juvenile can be seen at my other spotting: http://www.projectnoah.org/spottings/687...

Found in a box when unloading Christmas lights. I doubt it survived all year in the box so it must have managed to jump in when no one was looking. We put it in a small enclosure with sand to take some pics. It managed to get out and run in the house. My husband was nice enough to pick it up but got a nice bite from the lizard. "Found almost anywhere except in the deserts, mosty during daylight. Frequently found underneath debris. Commonly found in suburban yards, especially in Southern California." - CaliforniaHerps.com