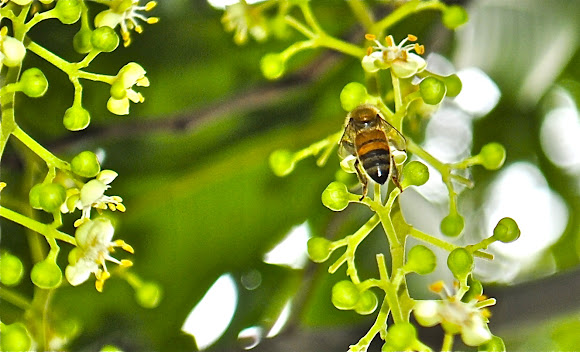 There are about 20,000 different species of bees in the world. Bees live in colonies and there are three types of bees in each colony. There is the queen bee, the worker bee and the drone. The worker bee and the queen bee are both female, but only the queen bee can reproduce. All drones are male. Worker bees clean the hive, collecting pollen and nectar to feed the colony and they take care of the offspring. The drone’s only job is to mate with the queen. The queen’s only job is to lay eggs. Bees store their venom in a sac attached to their stinger and only female bees sting. That is because the stinger, called an ovipositor, is part of the female bee’s reproductive design. A queen bee uses her ovipositor to lay eggs as well as sting. Sterile females, also called worker bees, don’t lay eggs. They just use their ovipositors to sting. Bees see all colors except the color red. That and their sense of smell help them find the flowers they need to collect pollen. Not only is pollen a food source for bees, but some of the pollen is dropped in flight, resulting in cross pollination. The relationship between the plant and the insect is called symbiosis. Certain species of bees die after stinging because their stingers, which are attached to their abdomen, have little barbs or hooks on them. When this type of bee tries to fly away after stinging something, part of the abdomen is ripped away.

Spotted in my backyard.

Beautiful video with sweet music,
Thanks for sharing,

Thank you very much Atul!