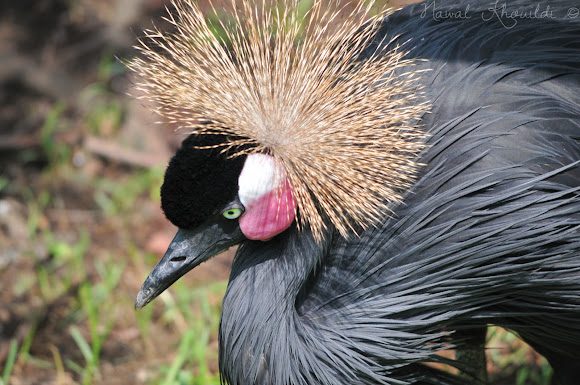 The Grey Crowned Crane (Balearica regulorum) is a bird in the crane family Gruidae. It occurs in dry savannah in Africa south of the Sahara, although it nests in somewhat wetter habitats. This animal does not migrate. There are two subspecies. The East African B. r. gibbericeps (Crested Crane) occurs from eastern Democratic Republic of the Congo through Uganda, of which it is the national bird, and Kenya to eastern South Africa. It has a larger area of bare red facial skin above the white patch than the smaller nominate species, B. r. regulorum (South African Crowned Crane), which breeds from Angola south to South Africa. This species and the closely related Black Crowned Crane are the only cranes that can roost in trees, because of a long hind toe that can grasp branches. This habit, amongst other things, is a reason why the relatively small Balearica cranes are believed to closely resemble the ancestral members of the Gruidae. The Grey Crowned Crane has a breeding display involving dancing, bowing, and jumping. It has a booming call which involves inflation of the red gular sac. It also makes a honking sound quite different from the trumpeting of other crane species. The nest is a platform of grass and other plants in tall wetland vegetation. The Grey Crowned Crane lays a clutch of 2-5 eggs. Incubation is performed by both sexes and lasts 28–31 days. Chicks fledge at 56–100 days. The Grey Crowned Crane is about 1 m (3.3 ft) tall and weighs 3.5 kg (7.7 lbs). Its body plumage is mainly grey. The wings are also predominantly white, but contain feathers with a range of colours. The head has a crown of stiff golden feathers. The sides of the face are white, and there is a bright red inflatable throat pouch. The bill is relatively short and grey, and the legs are black. The sexes are similar, although males tend to be slightly larger. Young birds are greyer than adults, with a feathered buff face. Although the Grey Crowned Crane remains common over much of its range, it faces threats to its habitat due to drainage, overgrazing, and pesticide pollution. Like all cranes, it feeds on insects and other invertebrates, reptiles, small mammals, as well as grass seeds.

Grey Crowned Cranes require mixed wetland-grassland habitats. They typically nest within or on the edges of wetlands while foraging in wetlands, nearby grasslands, and croplands. Nesting usually occurs in areas where wetland vegetation is of sufficient height to conceal the cranes on their nests. Their preferred foraging habitat consists of expanses of short- to medium-height open grasslands adjacent to wetlands. There they feed on the tips of grasses, seeds, insects and other invertebrates, and small vertebrates. They also forage in croplands for groundnuts, soybeans, maize, millet, and other items (Johnsgard 1983, Pomeroy 1980). Both the Grey and Black Crowned Cranes may roost in water or perch in trees (or on utility line posts). While rearing chicks, adult birds will sometimes hide their young in the wetland in the evening, and then fly to roost in trees. Thus, while Grey Crowned Cranes may breed in wetlands as small as 1.4 ha, the availability of upland feeding and roosting areas may determine breeding success as much as the availability of wetlands (Gichuki 1993).

The Grey Crowned Crane is the national bird of Uganda and features in the country's flag and coat of arms.