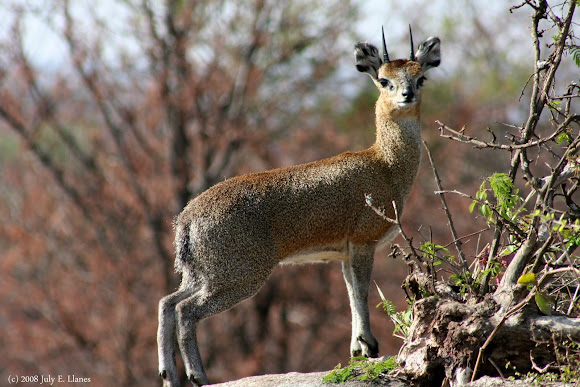 The word klipspringer literally means "rock jumper" in Afrikaans/Dutch. The klipsringer is also known colloquially as a mvundla (from Xhosa "umvundla", meaning "rabbit"). Reaching approximately 58 cm (22 inches) at the shoulder, klipspringers are relatively small animals compared to some of their larger antelope cousins. They stand on the tips of their hooves and can fit all four hooves on a piece of cliff the size of a Canadian dollar coin. Male klipspringers have horns that are usually about 10–15 cm (4–6 inches) long. Female klipspringers in Eastern African populations also have horns. With a thick and dense speckled "salt and pepper" patterned coat of an almost olive shade, klipspringers blend in well with the kopje (rock outcrops, pronounced "kah-pee") on which they can usually be found.

Nabeel --- you are right. Making the correction right now.

This is clearly a Klipspringer on your photographs,
it looks indeed a bit similar to a dik dik, but it doesn't have the typical elongated snouts that all dik dik species have.

Thanks for the ID!

A better description of the Dik-dik,in general, you can find under http://en.wikipedia.org/wiki/Madoqua