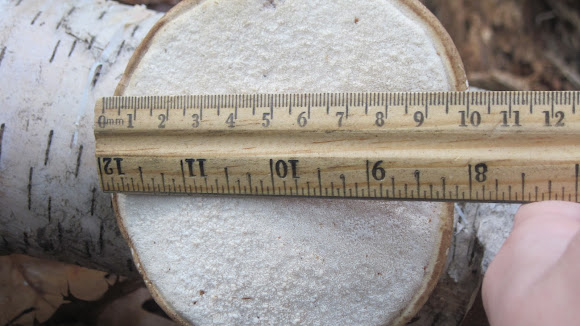 FIELD NOTES FOR MUSHROOM PROJECT MISSION We went outside on campus a couple weeks ago to look for mushrooms. If we found mushrooms we had to take a picture of it and then measure it and “snip” it so we could bring it back to the science room. It was very cold out that day. And a couple days before it had snowed do there was snow on the ground. A lot of the mushrooms were frozen. EVIDENCE The mushroom that I found I think is a Birch Polypore it is tough, flat, whitish, oval to kidney-shaped. The cap is 10 1/2 cm. long and 9 cm. tall. The top is whitish brown and the bottom is a whitish color. It has no gills. We couldn’t get a spore print color from it. There was no collar on it, and it didn’t have a cap because it was a flat mushroom. The stem was just a little stub, when we pulled it off the tree. We found this mushroom on a Birch tree. OTHER NOTES The mushroom smelled like baby powder. We found the mushroom on a birch tree. There was pine trees and oak trees around the mushroom. The cap was kind of slimy but not very slimy. Kingdom: Fungi Phylum: Basidiomycota Class: Agaricomycetes Order: Polyporales Family: Fomitosidaceae Genus: Piptoporus Species: P. Betulinus Binomial Name: Piptoporus Betulinus

great shots next time would u do more wrighting

WOW!!
When I first saw that mushroom I thought it was a cut off limb of the tree.
Wow!

It seems like it is a birch polypore because our group had the same type of mushroom as yours and they are alike.