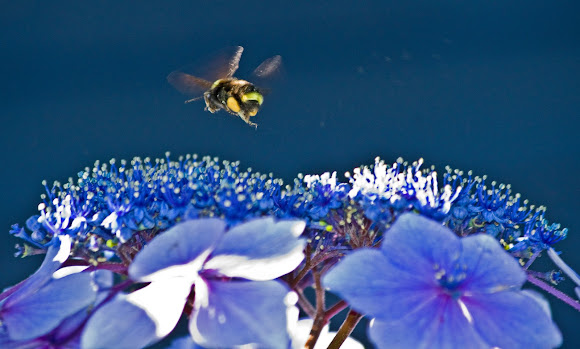 A bumble bee (also written as bumblebee) is any member of the bee genus Bombus, in the family Apidae. There are over 250 known species, existing primarily in the Northern Hemisphere although they are common in New Zealand and in the Australian state of Tasmania. Bumble bees are social insects that are characterised by black and yellow body hairs, often in bands. However, some species have orange or red on their bodies, or may be entirely black. Another obvious (but not unique) characteristic is the soft nature of the hair (long, branched setae), called pile, that covers their entire body, making them appear and feel fuzzy. They are best distinguished from similarly large, fuzzy bees by the form of the female hind leg, which is modified to form a corbicula: a shiny concave surface that is bare, but surrounded by a fringe of hairs used to transport pollen (in similar bees, the hind leg is completely hairy, and pollen grains are wedged into the hairs for transport). Like their relatives the honey bees, bumble bees feed on nectar and gather pollen to feed their young.

Bumble bees are typically found in higher latitudes and/or high altitudes, though exceptions exist (there are a few lowland tropical species). A few species (Bombus polaris and B. alpinus) range into very cold climates where other bees might not be found; B. polaris can be found in northern Ellesmere Island—the northernmost occurrence of any eusocial insect—along with its parasite, B. hyperboreus. One reason for this is that bumble bees can regulate their body temperature, via solar radiation, internal mechanisms of "shivering" and radiative cooling from the abdomen (called heterothermy). Other bees have similar physiology, but the mechanisms have been best studied in bumble bees.

Hey Sachin... this garage was my background

The picture is very nice, but does not fit in the Arthropod - Arthropod interactions mission.