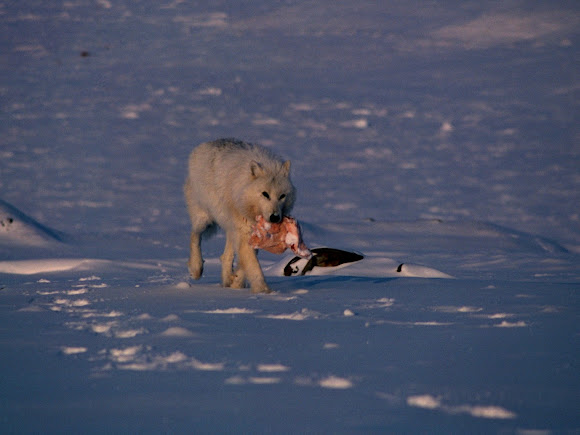 The Arctic Wolf (Canis lupus arctos), also called Polar Wolf or White Wolf, is a subspecies of the Gray Wolf, a mammal of the family Canidae. Arctic Wolves inhabit the Canadian Arctic, Alaska and the northern parts of Greenland.

The Arctic Wolf inhabits the northern part of Greenland, the Canadian Arctic and parts of Alaska. They have lived in North America for more than two million years. When they find a den, they make a couple of chambers for food and young. Arctic wolves live on the islands of the Canadian Arctic, and the north coast of Greenland, roughly north of 70° North latitude. The Arctic Wolf is the only subspecies of the Gray Wolf that still can be found over the whole of its original range, largely because, in their natural habitat, they rarely encounter humans.The Arctic wolf is also the only subspecies of wolf which is not threatened - their remote home means that they are relatively safe from man's activities, both in terms of hunting and habitat destruction. Their habitat is extremely harsh and remote, and few scientists venture into that world during the long, dark winter – even the vast majority of Inuit live further south than the Arctic wolf. As a result, the details of their lives through much of the year are virtually unknown.

The Arctic Wolf can withstand the arctic weather. They can survive in sub-zero temperatures for years, in absolute darkness for five months per year, and without food for weeks. Arctic Wolves usually travel in packs of 2 to 20. They live in small family groups: a breeding pair (alpha male and female) and their pups. The pack works together to feed and care for their pups. Lone Arctic Wolves are young males that have left their pack to seek their own territories. They avoid other wolves, unless they are able to mate. Having found an abandoned territory, a lone Arctic Wolf will claim it by marking the territory with its scent, then gather other lone wolves into its pack. When the female is pregnant, she leaves the pack to dig a den to raise her pups. If the ice is too thick, she will move to a den or cave.

You're welcome Marcel! It's wonderful to get spottings from a place like Nunavut!

Hi Alice, I use to fly up to Alert, Nunavut for my work... he's part of the local population at the northern Tip of Ellesmere Island.

as for what he's eating, my guess is a rib cage... of what... I can only assume, seal left overs after Bears had there meal of blubber

Please what is he eating and how did you get to see him?