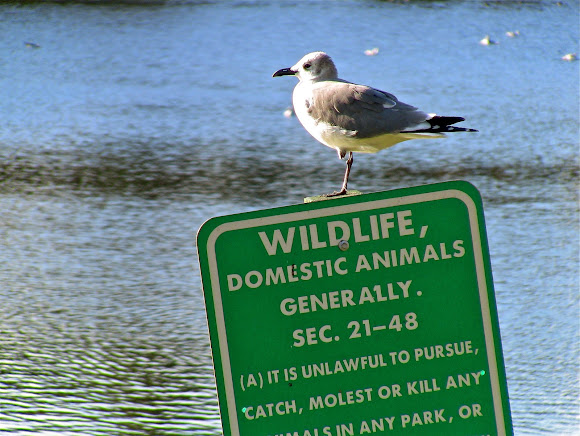 The Laughing Gull, Leucophaeus atricilla, is a medium-sized gull of North and South America. It breeds on the Atlantic coast of North America, the Caribbean, and northern South America. Northernmost populations migrate further south in winter, and this species occurs as a rare vagrant to western Europe. (There was an influx into North-west Europe in late October 2005 when at least 18, possibly as many as 35, individuals occurred on one day in the UK alone.) The Laughing Gull's English name is derived from its raucous kee-agh call, which sounds like a high-pitched laugh "ha... ha... ha...".

Laughing Gulls breed in coastal marshes and ponds in large colonies. The large nest, made largely from grasses, is constructed on the ground. The 3 or 4 greenish eggs are incubated for about three weeks. These are omnivores like most gulls, and they will scavenge as well as seeking suitable small prey.

He know where he's safe!