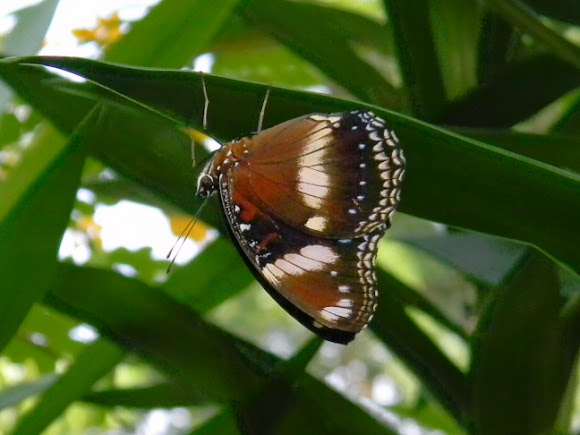 Known variously as the great, common or varied eggfly. "To the west the female is monomorphic, mimicking species of the oriental and Australasian danaid genus Euploea. Eastwards H. bolina is frequently polymorphic and most forms are then non-mimetic. In areas where it resembles Euploea the butterfly has usually been designated a Batesian mimic. It is found from Madagascar through to south and southeast Asia, south Pacific islands and occurs in parts of Australia, New Guinea, New Zealand and Japan."

Spotted in a large semi-urban yard and garden near a disturbed patch of remnant equatorial lowland forest.

I would agree with martinl: a transverse black mark at insterspace1 on the hind wing is also missing, which is found on the danaid eggfly: example here:
http://www.photographersdirect.com/buyer...

Do you mean H. bolina? Maybe...I just remember being so frustrated because I could not get a photograph of the striking upperwing spots...I don't remember the blue...And then lo and behold there was this other spotting. Perhaps I jumped the gun...

I am going to throw a spanner into the works. If you check the white band on the underwing of Chiquuita's spotting (Hypolimnas missipus) it is very wide. Yours is narrow. I suggest you have the frustratingly similar common eggfly (Hypolimnas bolina) http://sportsmancreek.org/index.php/2010...