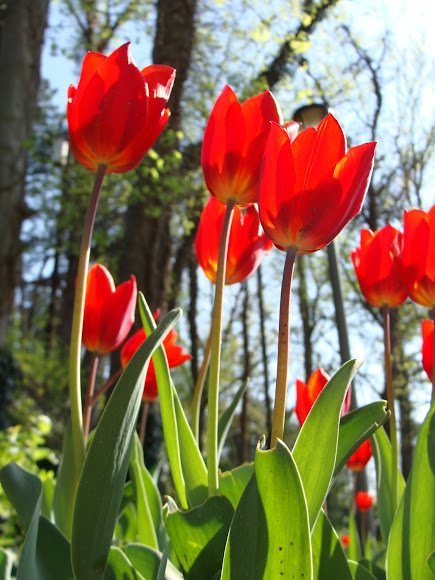 "Tulips are spring-blooming perennials that grow from bulbs. Depending on the species, tulip plants can grow as short as 4 inches (10 cm) or as high as 28 inches (71 cm). The tulip's large flowers usually bloom on scapes or subscapose[further explanation needed] stems that lack bracts. Most tulips produce only one flower per stem, but a few species bear multiple flowers on their scapes (e.g. Tulipa turkestanica). The showy, generally cup- or star-shaped tulip flower has three petals and three sepals, which are often termed tepals because they are nearly identical. These six tepals are often marked near the bases with darker colorings. Tulip flowers come in a wide variety of colors, except pure blue (several tulips with "blue" in the name have a faint violet hue).[4][5] Tip of a tulip stamen. Note the grains of pollen The flowers have six distinct, basifixed stamens with filaments shorter than the tepals. Each stigma of the flower has three distinct lobes, and the ovaries are superior, with three chambers.[further explanation needed] The tulip's fruit is a capsule with a leathery covering and an ellipsoid to subglobose shape.[further explanation needed] Each capsule contains numerous flat, disc-shaped seeds in two rows per chamber.[6] These light to dark brown seeds have very thin seed coats and endosperm that does not normally fill the entire seed.[7] Tulip stems have few leaves, with larger species tending to have multiple leaves. Plants typically have 2 to 6 leaves, with some species having up to 12. The tulip's leaf is strap-shaped, with a waxy coating, and leaves are alternately arranged on the stem. These fleshy blades are often bluish green in color."

Taken in my father's backyard :)