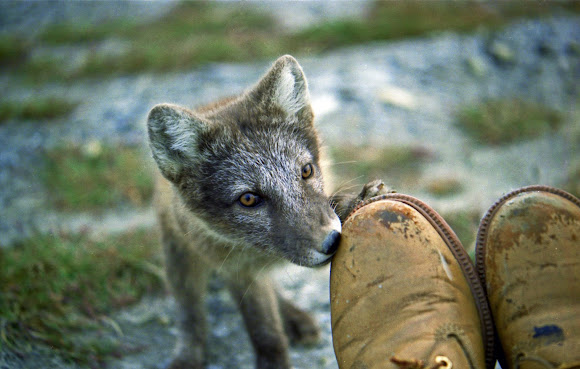 The arctic fox also known as the white fox, polar fox or snow fox, is a small fox native to Arctic regions of the Northern Hemisphere and is common throughout the Arctic tundra biome. The Greek word alopex, (ἀλώπηξ) means a fox and Vulpes is the Latin version. Lagopus is derived from Ancient Greek lago (λαγως), meaning "hare", + pous (πους), "foot" and refers to the hair on its feet. Although it has previously been assigned to its own genus Alopex, genetic evidence places it in Vulpes (Mammal Species of the World) with the majority of the other foxes.

The arctic fox lives in some of the most frigid extremes on the planet. Among its adaptations for cold survival are its deep, thick fur, a system of countercurrent heat exchange in the circulation of paws to retain core temperature, and a good supply of body fat. The fox has a low surface area to volume ratio, as evidenced by its generally rounded body shape, short muzzle and legs, and short, thick ears. Since less of its surface area is exposed to the arctic cold, less heat escapes the body. Its furry paws allow it to walk on ice in search of food. The arctic fox has such keen hearing that it can precisely locate the position of prey under the snow. When it finds prey, it pounces and punches through the snow to catch its victim. Its fur changes colour with the seasons: in the winter it is white to blend in with snow, while in the summer months it changes to brown.

: ))) A real long story contained... Ex Airforce, called on flying up to Alert (Northern Most Settlement on Earth) many times in my career... got to make friends with some of the locals. I had to assume they were rabies carriers, so this is the full extent of our physical contact. I have had many close encounters with many species, some solemn, some interesting... this one was playful. http://en.wikipedia.org/wiki/Alert,_Nuna... Prints of this image are available at: http://www.redbubble.com/people/mp-photo...

I wonder what the fox was thinking. :) What a great encounter!

I agree 100% Leuba... and our foot print is getting bigger everyday, not just by more explorers, but by basic exponential population growth

the innocence of the young.....I think the picture of the pair of boots is sadly symbolic of human activity in some parts of the planet ! -very good photo.

Thank you Zarina... I still dont know if he was being friendly or just trying to eat me :)))

Hi again Karen, well in summer, there can be as many as 400 people up there (in my days ...late 80's early 90's)... but very few spent time with the wildlife... I was working 12hrs on, 12hrs off, 4 days in a row, and 4 off... every chance I would get, I would be gone walk about... for full 24hrs at the time... none stop walking the vast and far remote expanse of wilderness that is Ellesmere Island, and Greenland for that matter : )