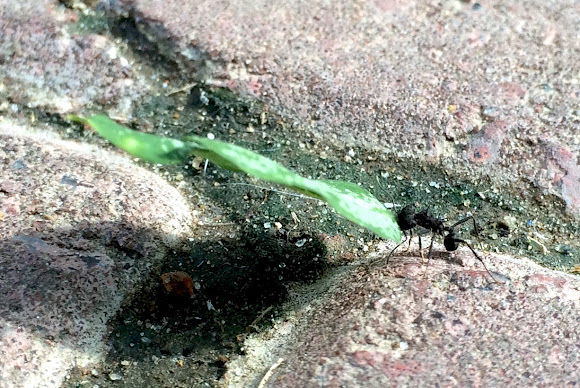 Acromyrmex and Atta ants have much in common anatomically; however, the two can be identified by their external differences. Atta ants have three pairs of spines and a smooth exoskeleton on the upper surface of the thorax, while Acromyrmex ants have four pairs and a rough exoskeleton. I believe this is a Acromyrmex as you can see in picture 1 that he has a rough exoskeleton. If anybody knows more about it please inform me! :-) Once foraging workers locate a resource in their environment, they lay down a pheromone trail as they return to the colony. Other workers then follow the pheromone trail to the resource. As more workers return to the nest, laying down pheremones, the stronger the trail becomes. The strength to which workers adhere to the trail (trail fidelity) depends mostly on environmental factors, such as the quality of the resource.. Mediae are the generalized foragers, which cut leaves and bring the leaf fragments back to the nest. When the ants are out collecting leaves, they are at risk of attack by some species of phorid flies, parasitoids that lay eggs into the crevices of the worker ants' heads. Often, a minim ( Minims are the smallest workers, and tend to the growing brood or care for the fungus gardens. Head width is less than 1 mm) will sit on a worker ant and ward off any attack.

On the pavement near Lezama park in Buenos Aires.

These ants were working hard and some were carrying the leaves uncut to their nest. They took advantage of a branch that had broken of the tree which was just lying around on the pavement.