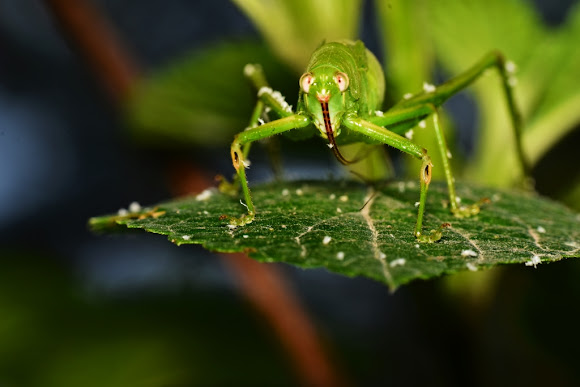 Introduction The oblong-winged katydid, Amblycorypha oblongifolia (De Geer, 1773), is a false katydid in the subfamily Phaneropterinae. It is very similar in appearance to Amblycorypha floridana, the Florida false katydid; however, the two species can be differentiated by their calling songs and distribution. Though once thought to be a seasonal color change, entomologist Joseph Hancock, in 1916, discovered the colors are a genetically inherited condition called erythrism. The largest member of its genus, the Oblong-winged Katydid can be recognized by its very dark stridulatory field and wings that extend farther back from the body than on other amblycoryphids. Oblong-winged Katydids are powerful fliers and can easily escape a collector. They prefer open weedy habitats with tall vegetation, where they perch near the top of plants to sing. The false katydid adults are distinguishable from the adults of the true katydids (subfamily Pseudophyllinae) by their hind wings that extend beyond their leathery forewings. True katydids have relatively shorter forewings, and, compared to those of the false katydids, the wings bulge out at the sides. This species of katydid is typically green, but can be pink, orange, tan, brown, or yellow, though it is rare to find these in the wild. Though once thought to be a seasonal color change, Unlike most species of katydids, males in the Phaneropterinae subfamily approach the females when they detect the females’ audible response to their calls

Song: A brief, two-parted zeee-dik! at around 9 kHz, given every few seconds. This unique song is easily distinguished from the songs of all other katydids. Location - Narsapur, Hyderabad District, Telanagana State, India

wonderful series of photos; especially like the first head-on view!