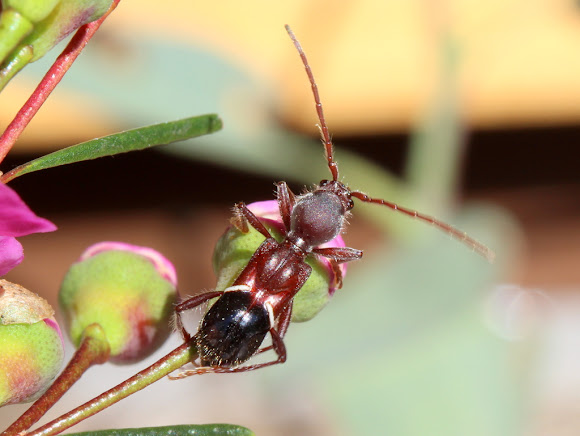 A multi brown small longicorn with very familiar patterns. This is likely attempting to imitate an ant but the beetle normally has even thickness laterally so this attempt at three bulbous body part looks quite strange and comical.

On a eucalyptus (stringybark) in a nature reserver

Martin, how fascinating ! bulges and markings in the right place to catch the light to mimic an ant - great spotting. I love the way he's stretching from one bud to the other in pic 3.

Thanks Lauren. Yes, I meant to say Clerid in my description, that is what I first thought it was.
Thanks Mark - I think he might get some respect. Those bull-ants were also there.
Thanks armadeus.4

What a cool little critter. Great pics Martin! Thank you for sharing :)

Fabulous spotting Martin. If that isn't a bull-ant... !!!