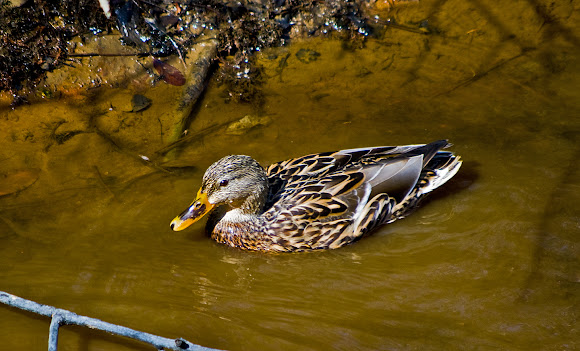 The Mallard, or Wild Duck (Anas platyrhynchos), The male birds have a bright green or blue head, while the female's is light brown. The Mallard lives in wetlands, eats water plants, and is gregarious. The Mallard is the ancestor of most domestic ducks, and can interbreed with other species of genus Anas. Among close relatives of the Mallard this hybridisation can cause genetic dilution, which is contributing the decline of rarer species of ducks. The Mallard is 50–65 cm (20–26 in) long (of which the body makes up around two-thirds), has a wingspan of 81–98 cm (32–39 in), and weighs 0.72–1.58 kg (1.6–3.5 lb). The breeding male is unmistakable, with a bright bottle-green head, black rear end and a yellowish orange (can also contain some red) bill tipped with black (as opposed to the black/orange bill in females). It has a white collar which demarcates the head from the purple-tinged brown breast, grey brown wings, and a pale grey belly. The dark tail has white borders. The female Mallard is a mottled light brown, like most female dabbling ducks, and has buff cheeks, eyebrow, throat and neck with a darker crown and eye-stripe. However, both the female and male Mallards have distinct purple speculum edged with white, prominent in flight or at rest (though temporarily shed during the annual summer moult).

The Mallard is widely distributed across the Northern Hemisphere, North America from southern and central Alaska to Mexico, the Hawaiian Islands, and across Eurasia, from Iceland and southern Greenland and parts of Morocco (North Africa) in the west, Scandinavia to the north, and to Siberia, Japan, and China in the east. It is strongly migratory in the northern parts of its breeding range, and winters farther south. For example, in North America it winters south to Mexico, but also regularly strays into Central America and the Caribbean between September and May. The Mallard inhabits a wide range of habitat and climates, from Arctic Tundra to subtropical regions. It is found in both fresh- and salt water wetlands, including parks, small ponds, rivers, lakes and estuaries, as well as shallow inlets and open sea within sight of the coastline. Water depths of less than 1 metre (3.3 ft) are preferred, birds avoiding areas more than a few metres deep. They are attracted to bodies of water with aquatic vegetation.