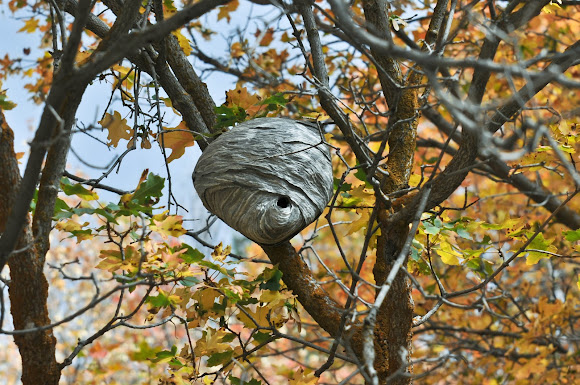 The bald-faced hornet lives throughout North America, including southern Canada, the Rocky Mountains, the western coast of the United States, and most of the eastern US. They are most common in the southeastern United States. They are best known for their large football-shaped paper nest, which they build in the spring for raising their young. These nests can sometimes reach 3 feet tall. Bald-faced hornets are protective of their nests and will sting repeatedly if the nest is physically disturbed. They are more aggressive than both the wasps normally called yellowjackets and members of the Vespa genus, and it is not considered safe to approach the nest for observation purposes. The bald-faced hornet will aggressively attack with little provocation.

No individuals sighted near nest.

I hope you will consider adding this to the Animal Architecture mission at: http://www.projectnoah.org/missions/8082...