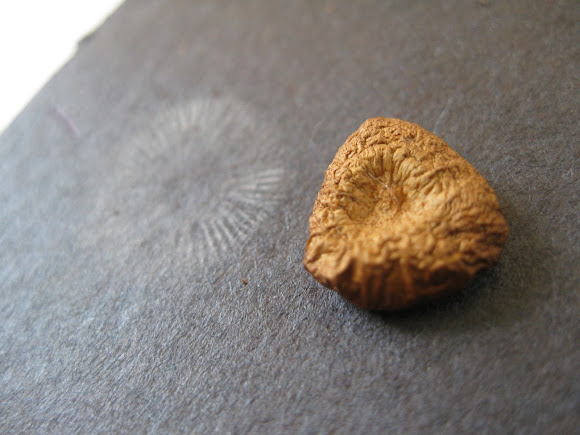 Mushroom ID: Kingdom: Fungi Division: Basidiomycota Class: Agaricomycetes Order: Russulales Family: Russulaceae Genus: Lactarius Characteristics: I found the mushroom in a group of 1-5. I also found another group of mushrooms. When we tried to get the spore print we had a white and a black paper. The spore print to this mushroom only showed up on white paper. The spore print was like a creamy color. The cap color was a brown/orange. The stalk was like the same color as the cap was. On this mushroom the gills were unattached. Also on this mushroom there was no collar. On this mushroom the cap was more of a circle shape. The cap was about 3-3 1/2mm wide. The mushroom was about 4mm tall. When I was researching I could not find what type of mushroom it is but I do know that it is part of the milk cap mushroom. But they looked just about the same type of mushrooms. We have to say what the mushroom smelt like. But the mushroom didn’t really smell like anything. The mushroom wasn’t slimy on the gills.

The mushroom was found in full sun and on the edge of the woods. When I went outside there was also a little bit of snow on the ground. We had a couple of trees near by. There was beech, maple, oak, and pine. The mushrooms that I found were in an open field.

I like how you show the alive picture of it and show the crumpled up one with spore print too.