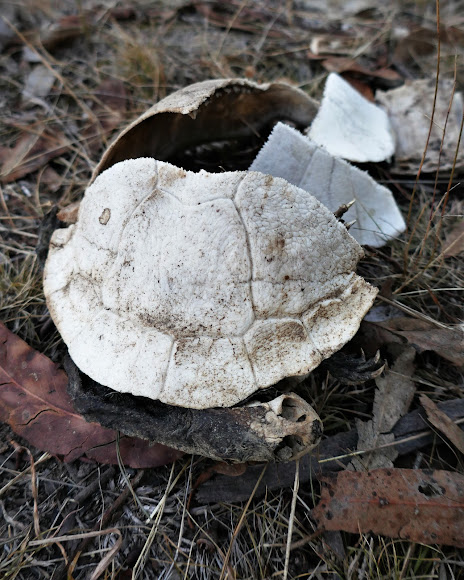 I found the remains of this freshwater turtle on the banks of a creek. It's a 'side-necked' turtle, which means it's a member of the Chelidae family. Although there are a number of ways to ID turtles, this species is (usually) easily distinguished by its wide plastron (the under part of the shell), made up of pale yellow shields with black margins, but any colour has long-since bleached away. Next is to look at the scutes of the carapace (plates on the shell). Another way is to count the number of claws on the forelimbs. Chelodina longicollis has four claws, whereas other species have five. Even though it was spotted a few months ago, I seem to recall there being four claws, hence my choosing this particular ID. Another freshwater species found in this area is Bell's Turtle (Wollumbinia belli), although it is an unlikely candidate as it has a saw-edged shell. These are the two most likely freshwater species to be found at this location, although Chelodina longicollis has a much greater range throughout eastern Australia. Its physical appearance also looks very familiar to me, particularly it's long neck, rounded carapace, and general facial dimensions. Here's one of my previous spottings of a living animal - https://www.projectnoah.org/spottings/13... The second reference link is a handy identification guide for freshwater turtles.

The New England District of the Northern Tablelands, NSW. Rural landscape, but large areas of natural bushland vegetation also. At the time of this spotting, drought conditions were prevailing and Yoongan Creek was completely dry. In wetter periods, however, this freshwater creek would be flowing and its deep pools full. Well-shaded area amongst native vegetation.

I can only surmise as to what caused the demise of this animal. This country is still in severe drought, as was the case back in June of 2018. The creek was bone-dry with absolutely no water, but with water it would be the ideal turtle habitat. The turtle remains are heavily bleached and look quite old and brittle, so this is unlikely to be a recent death, but regardless of it being 6 months or six years, similar conditions have prevailed in the past. Being a rural property, sheep and cattle would drink along this creek course, so perhaps the turtle was trampled? That would account for much of the damage, although I suspect the clean and even break of the forward part of the shell happened after the animal was dead. Perhaps it died from a lack of water, or even starvation, although nearby dams would still hold water and turtles are quite capable of travelling large distances between water sources. It could have been a victim of predation, maybe by a fox or crow or raptor? Poisoning is also a possibility as aerial dog baiting has/does occur in this area. '1080 wild dog poison' is used, and perhaps some made its way into the water supply. Unlikely, but possible. Finally, natural causes - it just died. Regardless of what happened, this little fellow is never going to tell us what occurred.