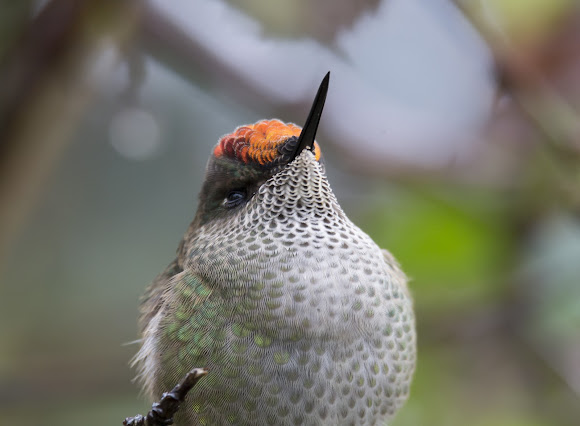 11 cms. The most common hummingbird of our forests and the low zones of much of Chile. Compact hummingbird, large-headed and short and rounded tail. Black beak, straight and proportionately short. Gray legs. White post-ocular spot. Metallic green head and tops with faint tan gloss. Whitish bottoms with profuse iridescent green mottling, especially on the flanks. Blackish scabs. Front and crown Red-fire metallic, only on the male.

Forests and their edges, especially in the vicinity of trees and shrubs of colorful flowers like Embothrium and fuschia. In cities, parks and gardens. In migration it frequents semi-desert environments of the center-north coast, and in the south, in the middle of the Patagonian steppe. From sea level to 2,000 mts. Resident annual, local to abundant, from the Austral islands of the Beagle Channel and Tierra del Fuego (Magallanes) to the national park Fray Jorge (Coquimbo). During the winter, some of its populations migrate towards the north and its low regions, reaching until the south of Antofagasta, accidental by the north of Arica. Also on Robinson Crusoe island, in the Juan Fernandez Archipelago. It is distributed by adjacent regions of Southern Argentina. Monotypic species.

Solitary, in pairs or in small groups. Very active, very fast and high flying. Stationary flight while feeding. During the winter, some specimens enter in a state of seasonal torpor, remaining inert in hangers and gaps. Very territorial and bustling. Acute called diagnosis. Quite confident

Great photo series! Congrats on spotting of the week!

Congratulations Jose, this exquisite hummingbird is our Spotting of the Week!

"This exquisite Green-backed firecrown (Sephanoides sephaniodes) is our Spotting of the Week! Known as colibrí austral or picaflor chico in Spanish, this hummingbird found in Chile and Argentina can be noted for its white post-ocular spot".

Beautiful ! Fire on his head and Sago pudding in the throat. Thanks for sharing this Jose.

Your spotting has been nominated for the Spotting of the Week. The winner will be chosen by the Project Noah Rangers based on a combination of factors including: uniqueness of the shot, status of the organism (for example, rare or endangered), quality of the information provided in the habitat and description sections. There is a subjective element, of course; the spotting with the highest number of Ranger votes is chosen. Congratulations on being nominated Jose!