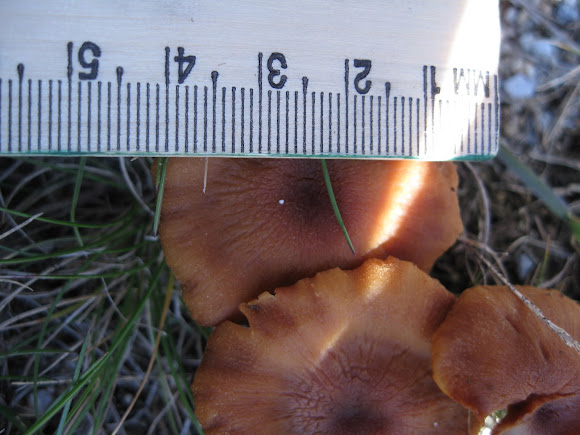 Fungi Info: Kingdom: Fungi Phylum: Basidiomycota Class: Agaricomycetes Order: Russulales Family: Russulaceae Genus: Lactarius Species: Unknown It is not slimy. The gills were unattached. The mushroom cap was brown/tan. It has a cream spore print. The cap was 3-3.5 cm wide and the mushroom was 4-4.5 cm tall.

The mushrooms that we found were by a sparse forest near a road. The mushroom was in the open sun. And was also found in a group of mushrooms of about 4-5.

This mission started on November 1, 2011. When we went outside we had to find mushrooms. As many as we possibly could. We had to get 2 of the same mushroom. And we only found 2 mushrooms. When we got the mushrooms we had to go inside cut the stem of and put one mushroom on black paper and one on white to see what the spore print would show up on. It showed up on black paper. It was a creamy color.The first mushroom we found, after researching it, found that it is some sort of milk cap.