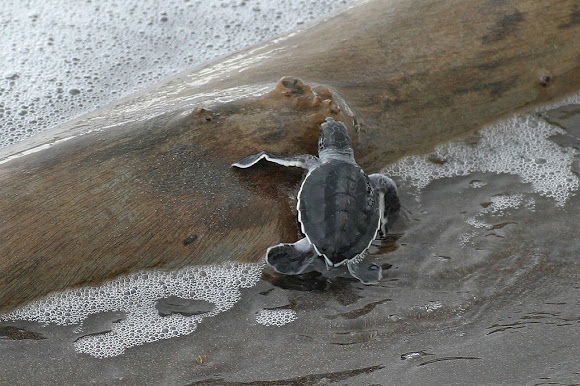 Tortuguero is one of the most important and largest nesting areas on the Atlantic coast and most significant in the world for this highly endangered species!! Since the 1950' scientist are yearly monitoring all the nests, together with the Costa Rican park managers. Included was also tagging of several hundreds of sea turtles to follow their migrations through the oceans. it hosts about 5000 to 15000 turtles along this 22 mile beach of Tortuguero. This sustainable development work together with the National Park, the local community and the tourist offices including the lodges can be regarded as pioneer work. Intact nature with all these living treasures has a greater value for the people than a dead turtle in a stewpot. But this was a long lasting process. And in Costa Rica this attitude has already a long tradition. Focus is also on the education of young people. For sea turtles life already begin with danger. First of all after the mother had deposited its eggs there are several predators such as coatis, raccoons, dogs and many birds. They know the routine and are just waiting for the mothers leaving the place and then dig out the eggs. http://www.flickr.com/photos/nadinee/522... Unfortunately people are doing the same. That's the reason why all the deposition places are strongly protected by law. During the high seasons of nocturnal nesting, so-called "arrivadas", many volunteers were guarding the beaches. In Tortuguero it is strictly forbidden to enter the beaches after 6 pm without any guide. Even with a guide you are not allowed to use flash, talk or moving apart the queue. Even the least disturbance would make the mother turn around and terminate the discarding of eggs. After arriving at the beaches the mothers are usually in a condition of complete exhaustion and the energy would often not be sufficient for a second attempt. That's the reason why you could usually not see images of the egg's deposition in the wild. I had the privilege to be a witness of this extraordinary event. It took about one hour until the mother turtle had discarded their approximately 100 eggs. Sea turtles come back every 2 to 5 years to the same beach where they were born. Deposition will usually be in several clutches (up to 8) on different days. Next danger step would be the hatching of the little babies. Again several predators were just waiting for this event. They know exactly where they have to wait for the babies: Again coatis, raccons, dogs, sea birds and mostly sharks, even in the shallow water. Since they are quite slow, small and still with a soft shell they are easy to prey. However, adult turtles have an astonishing survival rate of about 80% every year. Interesting fact: Temperature determines the sex! If the eggs are warm, prepare for daughters... They are other sea turtles in Tortuguero and Costa Rica: Olive Ridley Turtle (Lepidochelys olivacea) Loggerhead Turtle (Caretta caretta) Hawksbill Turtle (Eretmochelys imbricata) Leatherback turtle (Dermochelys coriacea) You see, even a trunk like this is a unmovable barrier for this little creature, running for life...

i would love to see the green sea turtle live.

Thanks my friends! And, yes, who would not have done the same thing if you have followed the whole fight for live during the first minutes and hours of live of this little beauties...

I, for one, don't see anything wrong with your "intervention". After all, human actions are largely responsible for the marked decline in all sea turtle species. They are all seriously endangered. It seems only fair that people should help the little guys out when they can. Perhaps you already know that in some places in Costa Rica volunteers dig up the turtle eggs and rebury them in a protected area, releasing the young to the ocean when they hatch. They do this to ensure that a larger percentage of the babies survive, and do not suffer such high levels of predation (including human predation).

Finally got to read this! Who would not have done the same...

A long story but unforgettable experience! Thanks for looking and reading...

Lovely story! I would have definitely done the same thing out of empathy for a fellow lack of sense of direction sufferer! Or perhaps he is just an individualist & didn't want to "follow the crowd"!