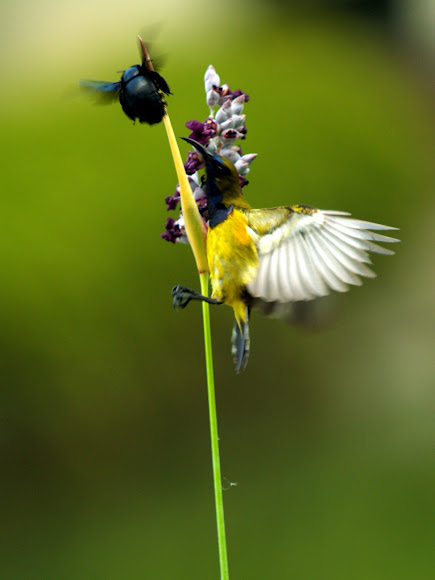 The Olive-backed Sunbird, Cinnyris jugularis, also known as the Yellow-bellied Sunbird, is a species of sunbird found from Southern Asian to Australia. I did not realize when I photographed this Sunbird and then suddenly came a beetle scramble for the nectar as well. It was taken in Toa Payoh Town Park, Singapore City. The sunbirds are a group of very small Old World passerine birds which feed largely on nectar, although they will also take insects, especially when feeding young. Their flight is fast and direct on their short wings. Most species can take nectar by hovering, but usually perch to feed most of the time.

Hi Cindy, they're fighting to get nectar from the flower. I've added another photos.
thanks

I'm curious to know the story of this interaction. Does this bird like to eat Carpenter Bee's or is it a chance encounter? Great pic!

This is a wonderful action shot!
You might be interested in the animal architecture mission since you're an architect http://www.projectnoah.org/missions/8082...

Thanks @JuanDiTrani for the info

this is a very nice picture. By the way, the black insect is a Carpenter Bee (Xylocopa sp.)