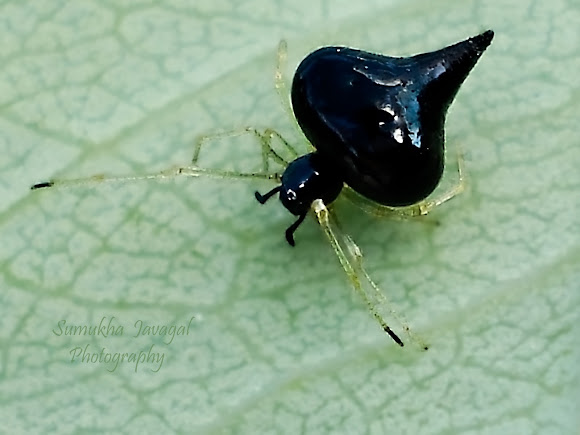 This spider was very tiny,, about 2-3 mm in size.. I was very lucky to spot this, since this doesn't look like a spider at first sight and it was very tiny.. When i took this upon my hand, it started weaving a web to escape from my hand.. Then i realized that this was a spider..! Cephalothorax glossy black in color, posteriorly narrowed and anteriorly wider,clypeus region slightly raised. three times anterior median eyes diameter. Eyes pearly white, except anteior median eyes that are black, laterals contiguous. Anterior eyes recurved, posterior eye row straight or slightly procurved. Chelicerae black.. Sternum dark brown, hear shaped, widest at coxae I and II, tapering at coxae III and IV. Labium and maxillae similar to sternum. Legs yellowish-whitish, with many dark brown longitudinal patches and joints, leg IV bears comb like structure. Spherical Abdomen with pointed posterior end. Shiny black in color. Dorsum with sparse hairs. Ventrum lighter than dorsum, dark brown spinnerets located at the beginning of the posterior tail. Epigyme with reddish border, epigastric furrow looks like a transverse line.

Live in Small irregular webs built in the lower surface of leaves. I found this spider on the underside of a leaf of 'Crape Jasmine" flowering plant.

This species is known by many names: 1) Chrysso nigra [OP Cambridge 1880] 2) Argyrodes nigra [OP Cambridge 1880] 3) Theridion oxyurum [Thorell 1890] 4) Theridion nigrum [Simon 1905] 5) Theridula caudata [Saito 1933] Some (or many) organisms have several scientific names because the different scientists that studied the same organism, each gave it different names. A common example is the tomato, having 3 scientific names.

Lovely sumukha!!
We got to see both male n female in coorg :)

What an interesting spider. It is shiny like a black pearl, but the shape is so unique, like a tear drop.

Thanks a lot Chun..:-) But i still have sooooooooooo much to learn..!

Nice job Sumukha,
you are becoming better at spiders every second.

Chun, this species is having 5 different names..! I have provided all the names in the notes section and also gave a detail description of this spider referring from the "Spiders of India" Book..:-)

Good idea.
Do you have the actual book at hand ?

K Chun.. So, i think it is better for me to provide the name of "Theridula caudata" in the notes section and also provide the link to "Spiders of India" book which states both of these names..:-)

Maybe both names are referring to the same spider.
Some (or many) organisms have several scientific names because the different scientists that studied the same organism, each gave it different names.
A common example is the tomato, having 3 scientific names.

Yes Chun.. The description in the book Spiders of india also match my spotting. But, take a look here- http://books.google.co.in/books?id=9oVHO......
It is given both in the name of Chrysso Nigra and Theridula caudata. Im very confused about this one..:-(

On the Net I found another species - Theridula caudata, that looks like Chrysso nigra.

That's amazing!!! What a lovely shape!

Thank u very much Muckpuk..:-)

How wonderful!! What a lovely ceramic vase....:-) GREAT spotting!

and 82 other people favorited this spotting