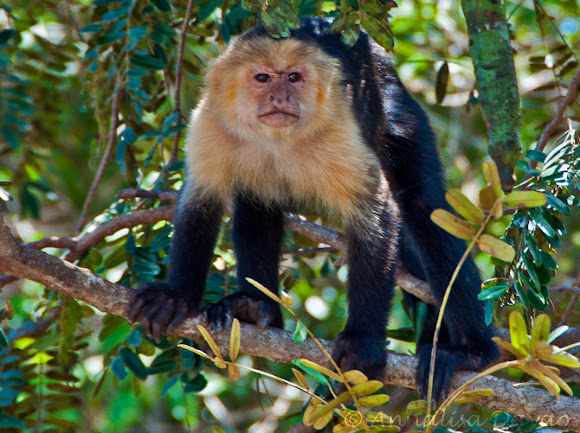 Capuchins are considered the most intelligent New World monkeys[11] and are often used in laboratories. The Tufted Capuchin is especially noted for its long-term tool usage, one of the few examples of primate tool use other than by apes. Upon seeing macaws eating palm nuts, cracking them open with their beaks, these capuchins will select a few of the ripest fruits, nip off the tip of the fruit and drink down the juice, then seemingly discard the rest of the fruit with the nut inside. When these discarded fruits have hardened and become slightly brittle, the capuchins will gather them up again and take them to a large flat boulder where they have previously gathered a few river stones from up to a mile away. They will then use these stones, some of them weighing as much as the monkeys, to crack open the fruit to get to the nut inside. Young capuchins will watch this process to learn from the older, more experienced adults.[12] It may take a capuchin up to 8 years to master this skill.[13]

The range of capuchin monkeys includes Central America and South America as far south as northern Argentina. Capuchin monkeys usually live in large groups (10 - 35 individuals) within the forest, although they can easily adapt to places colonized by humans.

Taken at Palo Verde National Park, Costa Rica. These wild monkeys are ever so curious and friendly. On another boat there were two monkeys climbing on the side railings and shaking peoples hands.