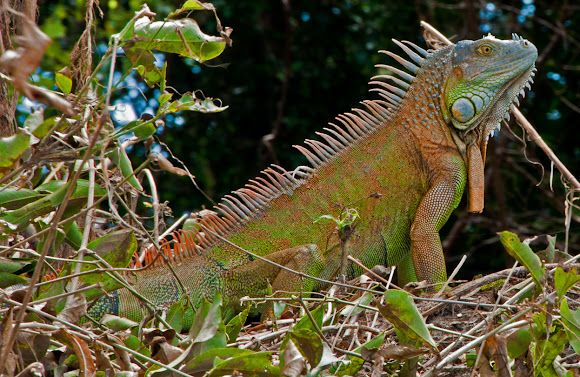 The Green Iguana or Common Iguana (Iguana iguana) is a large, arboreal herbivorous species of lizard of the genus Iguana native to Central and South America. The green iguana ranges over a large geographic area, from southern Brazil and Paraguay to as far north as Mexico and the Caribbean Islands; and in the United States as feral populations in South Florida (including the Florida Keys), Hawaii, and the Rio Grande Valley of Texas.

Oh wow....Thanks KarenL! Lovely to see this guy in the wild :)

Wowww! Annalisa this is AMAZING!

Forgot to add male iguanas turn a bright orange during mating season....it's really interesting to see these guys in action in the wild.