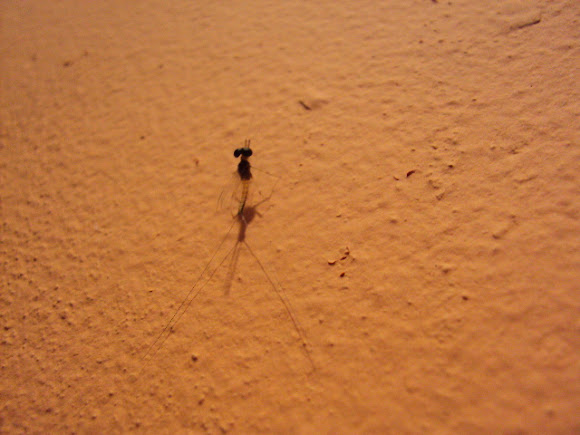 The lifespan of an adult mayfly is very short and varies depending on the species. The primary function of the adult is reproduction; the mouthparts are vestigial, and the digestive system is filled with air. The wings are membranous, with extensive venation, and are held upright like those of a butterfly. The hindwings are much smaller than the forewings, and may be vestigial or absent. The second segment of the thorax, which bears the forewings, is enlarged, holding the main flight muscles. Adults have short, flexible antennae, large compound eyes and three ocelli. In most species, the males' eyes are large and the front legs unusually long, for use in locating and grasping females during mid-air mating. In some species, all legs aside from the males' front legs are useless. Uniquely among insects, mayflies possess paired genitalia, with the male having two penises and the female two gonopores. The abdomen is roughly cylindrical, with ten segments and two long cerci at the tip.[1]

ok, thx Chung, I'll check out the infos on mayfly...

It is a mayfly, they are very delicate creatures.