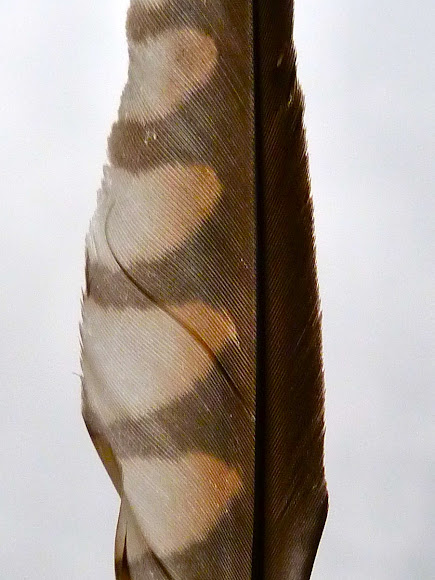 The American Kestrel is a small falcon, and the only kestrel found in the Americas. It is the most common falcon in North America, and is found in a wide variety of habitats. At 7–8 in long, it is also the smallest falcon in North America. It exhibits sexual dimorphism in size and plumage, although both sexes have a rufous back with noticeable barring. Juveniles are similar in plumage to adults. The American Kestrel hunts by hovering in the air with rapid wing beats or perching and scanning the ground for prey. Its diet typically consists of grasshoppers, lizards, mice, and other small birds.

It nests in cavities in trees, cliffs, buildings, and other structures. The female lays three to seven eggs, which both sexes help to incubate. It is a common bird to be used in falconry, especially by beginners.

Mine mainly comprises blue jay, dove & turkey feathers so this one is the star of the show!

It's a great thing to acquire a collection of single bird feathers from each of your local species. I have lost mine a really miss it. Start again I suppose.