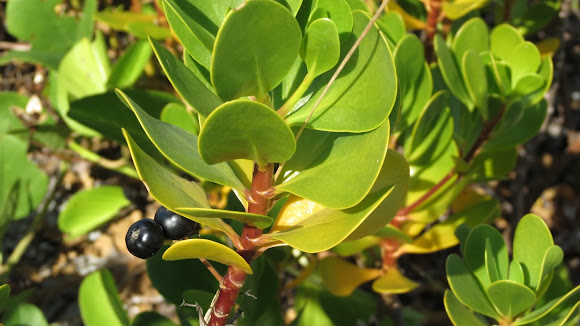 Found in coastal dunes and beaches and coastal habitats in central and southern Florida, the Keys, and the Caribbean. Listed as threatened by the state of Florida due to habitat destruction and rapid development of coastal areas, giving rise to condominiums and residental developments. Native to the U.S., where it is found mainly or only in Florida.

Highly salt-tolerant. Very similar to the exotic pest Beach Naupaka (Scaevola taccada var. sericea).A great native plant for wildlife and birds in coastal, salty, oceanfront situations. Drought-tolerant and suitable for oceanfront wildlife. The blackish berries of Inkberry provide food for wildlife such as gulls and seabirds (hence one of the common names, Gullfeed).