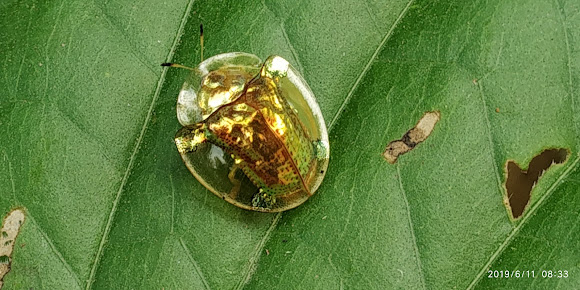 The golden tortoise beetle (Charidotella sexpunctata) is a species of beetle in the leaf beetle। Adult C. sexpunctata measure 5–7 mm in length. They are variable in color from reddish-brown with black spots through gold, and often metallic, earning it the nickname "goldbug". Elytral margins are expanded and nearly transparent. The color changes through its development, during mating, and during times of disturbance, such as when it is touched by a human researcher. Scientists have not examined the color-change mechanism in this species.

sorry... but this IS NOT Charidotella sexpunctata which is native to the Americas.!
see here: https://www.inaturalist.org/taxa/133439-...

Smaranika Sutradhar a year ago