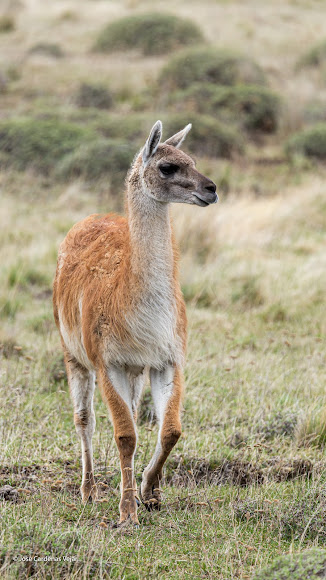 The Incas hunted the guanacos for their meat, skin and wool. It is estimated that there were 30 to 50 million guanacos in South America when the Europeans arrived, a figure that the hunters quickly reduced. Some are eliminated because they are believed to compete with the domestic sheep, others because their skin is of high commercial value.

Members of the family of camelids, the guanacos are the southern relatives of the llama and both are the South American cousins of the authentic camel. These animals live in arid and mountainous regions of Peru, Bolivia, Chile and Argentina. The name Guanaco comes from the Quechua word Wanaku. Despite being much harder to tame than llamas, guanacos have been hunted for their meat, wool and skin for centuries. Today, its population has decreased to about 500,000 with 90% living in the Argentine steppes.

The guanacos have long thin legs and necks, which allows them to run up to 35 miles (56 km.) Per hour. Speed ​​has proved to be a key adaptation for this herbivore: living in large meadows, with no place to hide, makes the best way to escape from predators is running. Almost like mountain goats in their alpine agility, guanacos can quickly climb and lower steep slopes with ease. Their large and flexible padded legs give them excellent stability in rocky terrain. An adult male guanaco can weigh about 300 lbs. (136 kilos). The guanacos live in large herds, composed of a dominant male and several females and juveniles, called chulengos. When they reach their first year, the male guanacos leave their family's pack to join a pack of other young single males. Around the age of five, a male will leave his single friends to try to lead his own group of females. The dominant male tries to protect his females and juveniles at all hours: he will stand guard or make sure that another member of the clan acts as a “sentry”, watching from a high point if predators come. These sentries use their strong vocal cords to alert their packmates of a danger with an extremely loud and high-pitched scream. That call warns the other animals in the pack to start, giving them an advantage. Another survival technique that guanacos use is to spit on their aggressor, be it a human or a cougar. It is not clear how effective it can be to spit on a hungry cougar, but it definitely discourages a curious human from getting too close. Like all members of the camelid family, guanacos can survive with small amounts of water for extended periods of time. They get and keep moisture from the plants they eat so they can spend days without water. The guanacos are also well adapted to life at heights. A tea spoon with its blood has 68 million red blood cells, 4 times more than a human. This density allows them to circulate enough oxygen around their bodies even at heights where oxygen levels are low. Learning these things about guanacos allows us to understand the basis of their behavior. But what is really entertaining is spending time watching a flock of guanacos grazing, socializing and moving around a place. Full of character and energy, these big-eyed animals can deliver hours of entertainment, especially when you start drawing your own explanations and theories about their curious behavior. As we usually say, "landscapes without wildlife are just scenarios."