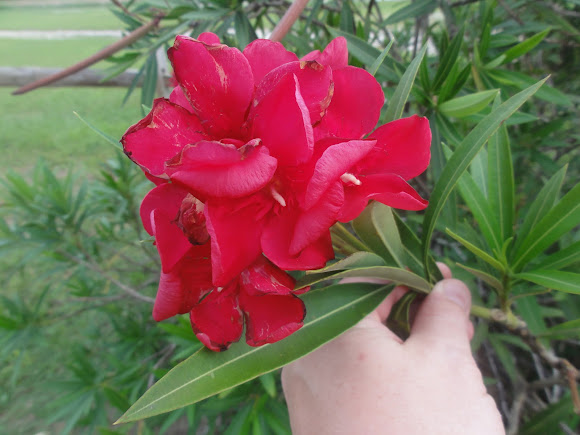 Oleander grows well in warm subtropical regions where it is extensively used as an ornamental plant in landscapes, in parks, and along roadsides. It is tolerant of drought and poor soil conditions, and will tolerate occasional light frost down to −10 °C (14 °F). Oleander has historically been considered a poisonous plant because some of its compounds may exhibit toxicity, especially to animals, when consumed in high amounts. Reported as invasive in parts of California, Nevada, and Florida

N. oleander is either native or naturalized to a broad area from Mauritania, Morocco, and Portugal eastward through the Mediterranean region and the Sahara, to the Arabian peninsula, southern Asia, and as far East as Yunnan in southern parts of China. It typically occurs around dry stream beds. Nerium oleander is planted in many subtropical and tropical areas of the world. On the East Coast of the US, it grows as far north as Washington DC, while in California and Texas it is naturalized as a median strip planting.

Spotted near the beach at Sullivan Island, SC