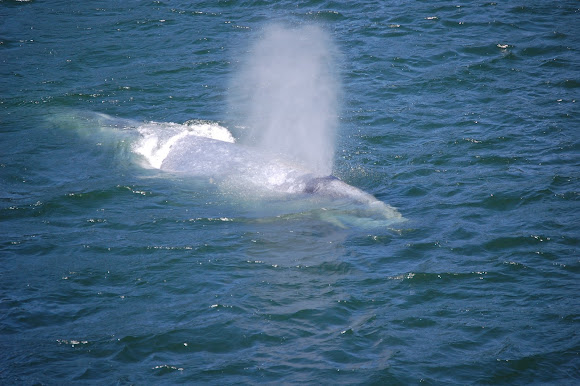 Female Gray Whale stranded in the Kalmath River, California Unfortunately she died days after these photos were taken. (see article in the notes section)

August 16th,2011 KLAMATH, Calif. — In a ceremony screened by tall willows, the Yurok Tribe on Tuesday laid to rest a 45-foot gray whale that had delighted residents, passers-by and scientists after swimming into the lower Klamath River with its calf nearly two months ago. With scientists by its side, the whale died at about 4 a.m. after beaching itself on the northern bank of the river. Crowds of people gathered to the spot within sight of the U.S. Highway 101 bridge and an RV park where they had watched for weeks as it swam back and forth, seemingly taking pleasure in the attention. "It's very sad," said Thomas O'Rourke, chairman of the Yurok Tribe, whose reservation lines the banks of the river south of Crescent City, Calif. "It started to become a part of the community." A large backhoe hauled the whale onto the riverbank above the high tide line and dug a pit, O'Rourke said. After singing a song and saying a prayer to send the whale on its journey to the afterlife, tribal members turned over the carcass to scientists for a necropsy. A burial was to follow. There was no obvious reason the whale died, said Dawn Goley, professor of zoology at Humboldt State University. The whale came into the river in late June with its calf, gradually working its way upriver until its favorite haunt was underneath the U.S. Highway 101 bridge. Crowds of people ran across the roadway, oblivious to speeding traffic, to watch the whales swimming underneath. Some serenaded them with violins and flutes. One person jumped out of a kayak to swim with them. "It was like a rock concert," said Reweti Wiki, a partner in the Requa Inn bed and breakfast overlooking the river and a Maori from New Zealand. "Early on, it was a novel experience, with people happy and intrigued. But as it dragged on, people became concerned. Eventually it turned into a tragedy. As it moved past normal, there was a sense that people were visiting to say their final farewells, or wish she would do something to improve her situation." No one knows why the whale took refuge in fresh water while migrating north from the birthing grounds off Baja California. Some scientists say it may have been driven inland by killer whales. On Tuesday afternoon, about a dozen people stood on the bridge to watch the researchers. Among them was Phil Purcell, who lives in the nearby town of Arcata. "We thought we would pay our respects," said Purcell, who brought his twin 7-year-old sons, Shane and Kai. "It's sad because we didn't get to see it alive," Kai said. "That poor calf has got to swim around for the rest of its life without its mother," his father added. The calf swam back out to sea on July 23, about the right time for it to wean and go off on its own. But efforts to drive its mother back to sea, including calls of killer whales played upriver, did not persuade it to leave. It stayed, sometimes feeding on invasive species of clams and snails in the mud of the river bottom, shooting great geysers of air and water out of her blowhole. The whale revived memories of a story told by late tribal member Fannie Flounder and recounted by anthropologist Theodora Kroeber in the book, "The Inland Whale." "She said when the whale is in the river, it means the world is out of balance ... things aren't the way they should be," said Janet Wortman, a relative of Flounder and partner in the Requa Inn. "Fannie said you all need to get together and pray and dance and beat your feet on the ground and that will tilt the earth back the way it is supposed to be." The last time wayward whales made headlines in California was in 2007, when a mother humpback and her calf journeyed 90 miles up the Sacramento River. The two were followed by crowds for more than two weeks before swimming out to the Pacific Ocean at night. O'Rourke said he agreed that the whale's visit meant the world was out of balance, that ecosystems failing. He said the whale brought together state and federal agencies and the tribe in a way he has never seen. "It is acts like this that are going to happen if we are going to stabilize the environment," he said. ___