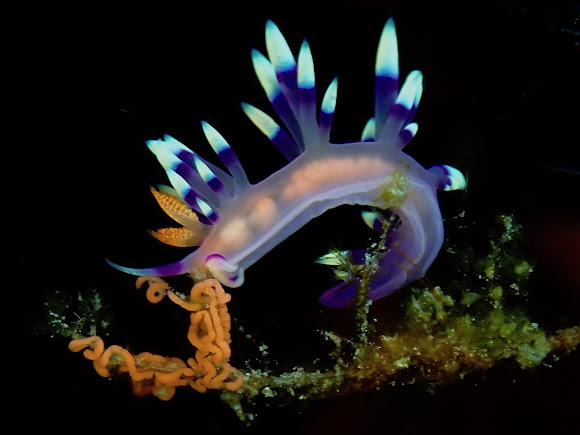 This Nudibranch - Coryphellina exoptata was seen on its host (food source Hydroids) and laying her eggs on it, probably giving her next generation a better start in their life, to get to food right away.

Usually found among Hydroids, which is their food source.

This Nudibranch was previously known as Flabellina exoptata and now reclassified to a different genus as Coryphellina exoptata. Many species of Nudibranch has in recent years had to be reclassified with new methods of studying/verifying them including by DNA providing better understanding and differences in closely related species/genera. And the common name of Desirable Flabellina using its old genus name shows that Common names can be troublesome in such situations when Genus names are changed!

Thanks, @Mark for sharing the link to more Nudibranch :D

@OpkinTree - Nudibranch are sea snails without shells. They are mostly very colourful and/or interesting markings like Caterpillars/Butterflies :)

Impressive shot! I've never heard of a Nudibranch before.

Thanks too, @Mark.
This pictures were taken during day time, in fact at 10:15 am in the morning.
The black background effect is the result of the shooting angle and lighting technique :D

Desirable? ..yes I think I would like one.
These night shots are really cool. No distracting stuff.