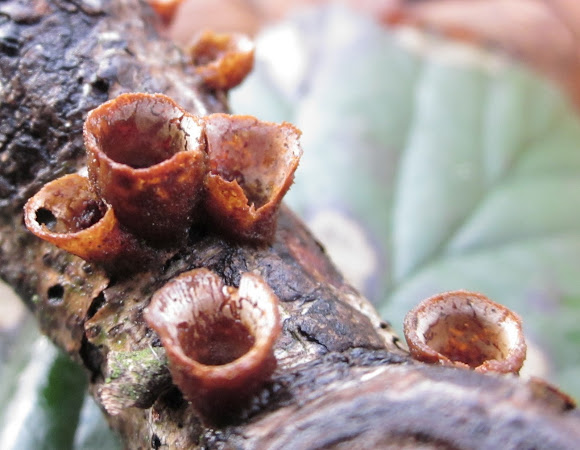 commonly known as the fluted bird's nest, This fungus resembles a miniature bird's nest with numerous tiny "eggs"; the eggs, or peridioles, are actually lens-shaped bodies that contain spores. C. striatus can be distinguished from most other bird's nest fungi by its hairy exterior and grooved (striated) inner walls. Although most frequently found growing on dead wood in open forests, it also grows on wood chip mulch in urban areas. The fruiting bodies are encountered from summer until early winter. The color and size of this species can vary somewhat, but they are typically less than a centimeter wide and tall, and grey or brown in color. Another common name given to C. striatus, splash cups, alludes to the method of spore dispersal: the sides of the cup are angled such that falling drops of water can dislodge the peridioles and eject them from the cup. The specific epithet is derived from the Latin stria, meaning "with fine ridges or grooves

Cyathus striatus is a common saprobic bird's nest fungus deriving its nutrition from decaying organic material, and is typically found growing in clusters on small twigs or other woody debris. It is also common on mulch under shrubs. The features of the microenvironment largely influence the appearance of C. striatus; all else being equal, it is more likely to be found in moist, shallow depressions than elevated areas. It is very widespread distribution throughout temperate regions of the world, growing in summer and fall

Because the basic fruiting body structure in all genera of the Nidulariaceae family is essentially similar, Crucibulum may be readily confused with species of Nidula or Cyathus, especially older, weathered specimens of Cyathus that may have the hairy ectoperidium worn off. It distinguished from Nidula by the presence of a funiculus, a cord of hyphae attaching the peridiole to the endoperidium. Cyathus differs from genus Crucibulum by having a distinct three-layered wall and a more intricate funiculus --- i haven't seen any cord residu, and the walls seems to be at least out of 2 layers {maybe 1 is already completly disapeared}, --while my first suggestion was "crucibulum",because of this discription, i will lean onto genus: cyathus- (it is said, that here is only 1 cyathus species present- therefore--> schould this be cyathus striatus (completly sloppy)