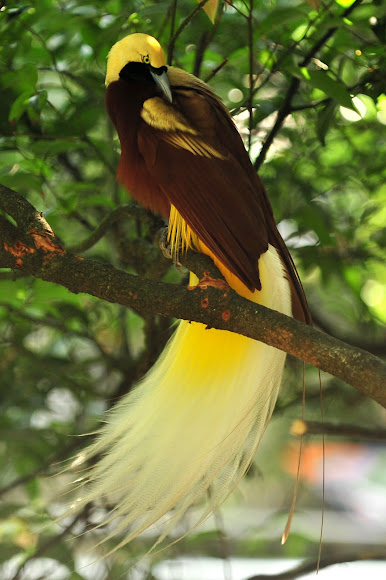 The Lesser Bird-of-paradise is medium-sized, up to 32 cm-long, maroon-brown with a yellow crown and brownish-yellow upper back. The male has a dark emerald-green throat, a pair of long tail-wires and is adorned with ornamental flank plumes which are deep yellow at their base and fade outwards into white. The female is a maroon bird with a dark-brown head and whitish underparts. Further study is required,[2] but it seems likely that birds of paradise also possess toxins in their skins, derived from their insect prey.

Thanks for ID correction, TracyL, S Frazier.
Thanks guys, glad you love this spotting, :)

Hello. I have re-arranged your names so that they appear in the proper locations, moving the common name Cendrawasih (Indonesian for "Bird of Paradise) from the Scientific name to the top position, and removing the genus name (Paradisaea) from the common name and leaving it in its correct position below. You might want to consider the species suggestion and use those names which are more precise.

This spotting took my breath away! Truly beautiful!

Nice photo. A fantastic bird for sure! You are correct in stating that this bird occurs in Papua (formerly known as Irian Jaya), but it doesn't recognize borders and occurs on the eastern half of New Guinea too, in PNG (see http://maps.iucnredlist.org/map.html?id=... ). While it is spectacular, it is as yet not considered "rare" given its very large range (IUCN status LC). But that doesn't mean doesn't face threats. The are routinely taken for customary adornment and also for the illegal wildlife trade.

Wow.. this is so beautiful! Was this in the wild? Amazing!

Wow! What a beautiful bird!
Thanks for sharing & welcome to Project Noah Fransiskus!